Will Republicans have the stones to put Uncle Sam in the unemployment line?

The federal government is big, unwieldy and incompetent. Is there something about large organizations that by definition make them incapable of operating effectively and efficiently? No. Wal-Mart is the largest private employer in the United States 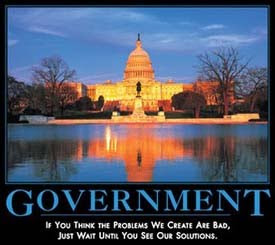 and one of the largest in the world. It employs 1.8 million Americans and another quarter of a million people in countries from China to Argentina to the United Kingdom. Wal-Mart may not be your cup of tea, but they unquestionably do a phenomenal job at what they are in business to do: Sell consumers goods they desire at low prices. One can dislike much about the firm but people are clamoring for its jobs and customers willingly give the company almost half a trillion dollars a year. This sixty five year old, nimble, effective and efficient company demonstrates that a large company does not necessarily have to be a lumbering paragon of failure.

Successful, well run large organizations come in all shapes and sizes as well: publicly traded, privately owned, for profit and not. McDonalds, Publix, Kelly Services, Red Cross, FedEx, Boy Scouts, Cargill. Google. The success of all of these companies destroys the argument that large organizations must be ineffective and poorly run.

One name you won’t find on that list is Uncle Sam. The federal government is the single largest employer in the United States. Not only is Uncle Sam the largest employer in the country, but according to a USA Today analysis published last week, federal employees earn literally double what private sector employees earn. On its face that is absurd. The government doesn’t produce anything. It doesn’t create wealth. Government exists only to the extent that it can take (by threat of force) money from citizens who are subject to its jurisdiction.

The fact that federal employees earn double what private sector employees earn might make some sense if government were somehow providing something of value that it was somehow uniquely qualified to do. It doesn’t. There are few things the government does that could not be done far more efficiently and effectively by a private organization. Imagine if the Post Office was run by FedEx. Better yet, imagine if competition for the mail service were opened up to FedEx, UPS and some unknown entrepreneurs with a brilliant idea we’ve never even heard of. Imagine if Amtrak was scrapped and companies decided to provide passenger rail service based upon where passengers wanted to go and what they were willing to pay. In both of these cases and many more the services that the government is providing could be done by companies seeking to make a profit.

The profit motive is a wonderfully clarifying tool. It focuses one’s attention when deciding where to allocate scarce resources. It is of course not the only motive for which people and organizations do things, but unlike charity, support of education, helping the homeless and many other virtuous pursuits, profit generally has a measure of clarity that is unambiguous and devoid of subjective interpretation.

One typical argument in support of government inefficiency is that government does not exist to make a profit. That is true. No one begrudges the Defense Department for not making a profit and few people would want to the FBI to offer its services to the highest bidder. But most citizens do want a government that is run on a tight budget and that only spends money on what is necessary. As such the government should do only those things it must and leave the rest to the private sector. The beauty of profit is that it allows citizens to do a great deal of good, and do it far more efficiently than government. Profit allowed Andrew Carnegie to build 1,500 libraries around the country and another 1000 around the world. Profit allowed JD Rockefeller to fund Spelman College, the University of Chicago, finance the foundations of modern medicine as well as help renovate Versailles in France. Profit has allowed Bill Gates to revolutionize the global philanthropy universe by bringing business techniques to research and funding. For every one of those profiteers there are millions of Americans who write small checks from their own checking accounts to fund organizations from the Red Cross to the Boy Scouts to the United Way to their local churches and civic organizations. (And there are millions more who donate their time and energy.)

By allowing citizens to keep the profits of their efforts they can do far more to address social issues than any faceless government agency. Does anyone not recognize that the Salvation Army could probably do a better job of fighting homelessness or hunger than Health and Human Services if they had even half of HHS’s budget? Does anyone doubt that the hundreds of Catholic schools across the country or Michigan’s Hillsdale College are far better models for education than anything the US Department of Education has ever come up with or imposed? You might not like their politics but at least your kids could read and add 2 + 2. If the government took less control over citizens lives and left them with more of their own money, they would support their local churches and civic organizations who would in turn address social issues on a local and far more rational level, and probably actually make progress on solving them.

The other typical defense of government inefficiency is that government employees are typically better educated and more qualified than their private sector counterparts, and hence must be paid more. That is simply false. President Obama has degrees from two of the most prestigious universities in the country yet he has shown himself to be an incompetent leader and manager. Anyone who has ever tried to navigate the maze of federal agencies can recognize that education and “qualifications” have a zero correlation with effective government. One would imagine there were lots of MBAs and lawyers on staff at the SEC over the two decades they failed to recognize that Bernie Madoff was a crook, despite numerous phone calls and letters suggesting improprieties. How long would that fraud have taken to discover if the people from whom he swindled $50 billion had had to do their own due diligence on Madoff rather than relying on the intrepid SEC? Somehow one would imagine that the damage would have been only a fraction of the final bill. 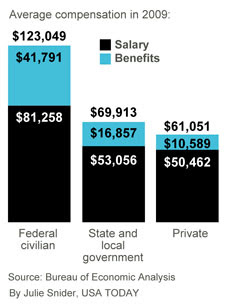 It’s bad enough when citizens see that the taxes they pay are being redistributed to those who are not sharing their tax burdens or are going to prop up banks and car companies that should have been allowed to fail, but when they see that federal employees earn twice what they do – with rock solid job security – in a government that fails at most things it pursues, they begin to question the legitimacy of government at all.

The next 30 months are going to provide Republicans with a once in a generation opportunity. When they return in January and control Congress they can either return to the big government game that they played for much of the previous two decades or they can decide to become real conservatives and return the country back to the people. Start from scratch and require every department to justify its existence. Do away with Executive Order 10988 which allowed unionization of federal workers. Put Americans back in control over every segment of their lives that is possible and that goes from Social Security to support of the poor to when they want to pay taxes (via the FairTax).

If Republicans can’t earn their conservative bona fides in this kind of an environment, when the table has been so perfectly set for them, then they deserve to be tossed on the dustbin of history as the socialist horde overruns the country and systematically destroys everything that was once great. Will they be up to the challenge? Let's hope so.
Posted by Imperfect America at 4:36 PM