Shame and public humiliation used to be very effective forms of social conditioning. In Middle Age Europe an offender would often be placed in a pillory or stock and be subject to public humiliation and ridicule for their offense. The idea was that after being subjected to such humiliation the offender would mend their ways in order to avoid a repeat performance. Such discipline was not always effective, but the recidivism rate was probably far below what is seen in the American judicial system today. 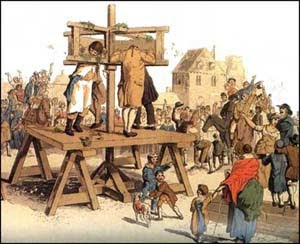 In America circa 2010 one could make the argument that the very notions of shame and public humiliation have almost vanished in both public and private spheres. Paris Hilton, Eliot Spitzer, Barry Bonds, Charlie Crist, the Salahis, the popularity of Reality TV etc. In an America where almost anything seems to go, where nothing is reproachable, where everyone’s position is equally valid regardless of its substance, it’s no surprise that we have a President and administration who have the audacity to make ludicrous arguments to demonstrate the success of their policies and then expect us to accept them – and that’s before the sycophants in the media begin to spin them.

President Obama set the tone early on. In the administration that promised an unprecedented level of transparency, they were going to be crystal clear in demonstrating the efficacy of their policies in the place where it mattered most: Jobs. While previous administrations traditionally utilized the traditional Payroll or Household Surveys to measure the effect of their policies, this administration was turning a new page in government accountability, jobs that were “Saved or Created”. Rather than tethering themselves to what was actually going on in the economy, President Obama created a fantasy measurement with no correlation to anything but their imagination, something that could be neither be proved nor disproved. Saved or Created is such a vacuous measure that it would actually be possible for the administration to claim they had saved virtually every job in America. One could imagine President Obama giving the following statement to start off the Summer of Recovery:

“The country’s economic situation when we took over was so bad we were forced to take drastic measures. The single most significant measure we took, The American Recovery and Reinvestment Act was a resounding success. Uncertainty at the time was deep and widespread: There were suggestions China was preparing to dump American bonds, OPEC was looking at pricing oil in Euros and companies across the country were considering mass layoffs to conserve cash. The American Recovery and Reinvestment Act gave international markets and domestic employers the confidence that our administration was going to do what was necessary to bring order to America’s economic house after eight years of economic mismanagement. As a direct result of that stimulus bill and our sound economic policies, the 25 million jobs that our internal analysis suggested might be lost were indeed saved and I’m glad to say here today that we have put our economy back on solid footing and America is beginning to grow once again.”

While he didn’t actually make the above statement, given the lack of substance underlying the Saved or Created measure and the media’s proclivity to paint everything Obama in glowing hues, one wonders why they didn’t.

Now that the Summer of Recovery has been shown to be on life support and Saved or Created has not helped President Obama’s cratering approval ratings, the administration has just rolled out the latest measure for demonstrating the genius of their economic policy… “Lives Touched”. According to CHT2M Hill, the company that received 4 or the 10 largest contracts under the stimulus plan:

First Saved or Created and now Lives Touched? Really? Such idiocy could only happen in a country where embarrassment, shame and humiliation have ceased to exist. What else explains the willingness of the administration to seriously suggest such tools to measure economic efficacy? That is the mentality of 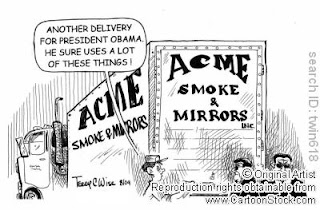 a four year old with cookie crumbs on his face telling his mommy that some imaginary person took the cookies. The four year old might be excused as having not quite grasped the concept of truth vs. fiction. Despite their childlike pursuit of policies that are so obviously flawed, the Obama administration is not filled with children. They should have, at least in concept, understood that inventing unsupportable criteria to measure real world events is simply unacceptable. Only in a country that no longer knows what shame means can politicians act with impunity when they should be embarrassed. In the fable “The Emperor’s New Clothes” the Emperor was not embarrassed because he actually thought he was wearing respectable clothes. Barack Obama on the other hand has been nakedly inventing stories to mislead the American public for 18 months. Perhaps a little shame and public humiliation are in order for having the audacity to think Americans are too stupid to see through his illusions.
Posted by Imperfect America at 1:01 PM