There is an old adage that goes something like this: It’s better to keep your mouth shut and let people think you’re stupid than to open your mouth and prove them right. 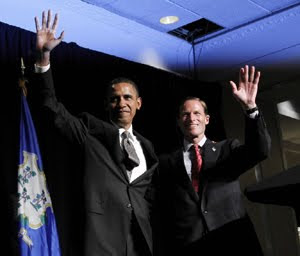 Thankfully for America not all Democrats are paying that adage much heed, and just in time for the election. Last week Linda McMahon, the GOP candidate for US Senate from Connecticut did the voters of her state a great service. She asked Richard Blumenthal, her Democrat opponent, a simple question: “How do you create a job?” His answer, if you can call it that, was a minute and a half of television gold, which would have been suitable for Laugh In were it still on the air:

“A job is created, and it can be in a variety of ways by a variety of people. But principally by people and businesses in response to demand for products and services. And the main point about jobs in Connecticut is, we can and we should create more of them by creative policies. And that's the kind of approach that I want to bring to Washington… I know about how government can help preserve jobs. And I want programs that provide more capital for small business, that are tax policies that will promote creation of jobs, stronger intervention by government to make sure we use the Made in America policies and Buy America policies to keep jobs here rather than buying products that are manufactured overseas.”

At the beginning you think he might almost be stumbling into the right answer only to watch him find his bearings and focus so that by the end it's crystal clear that he has no idea how to create jobs. The key phrase in his answer is “stronger intervention of government”. Dick Blumenthal in one moment of clarity demonstrates the typical Democratic approach to solving every problem in the country: Government intervention.

Despite decades of failed examples of government intervention in virtually every aspect of the American economy, Democrats still seem unmoved by actual evidence of failure and cling to their progressive notions that nirvana is to be found at the end of a bureaucrat’s pen.

If Blumenthal were the only one then you could make the argument that he was an outlier and that most Democrats aren’t of that cloth. Luckily he’s not the only one who opened his mouth this week to demonstrate Democratic ineptitude. He was joined by Nancy Pelosi as she responded to Newt Gingrich. In a note to GOP candidates Gingrich suggested they make the campaign about the “Democratic Party of food stamps and the Republican Party of paychecks.” He points out that when Nancy Pelosi and the Democrats took over Congress: ‘Unemployment was 4.6% and food stamp usage was around 26.5 million Americans. Today, the unemployment rate is 9.6% and over forty million Americans are on food stamps.” 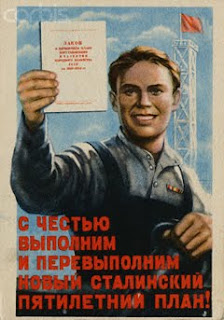 The Democratic belief that prosperity can be legislated or redistributed into existance makes no sense, particularly in a universe where there is simply no empirical evidence that such policies work and legions of examples that it doesn’t work. It almost makes one think of the Soviet Union’s Five Year Plans where the planning committee would set out rosy economic plans for the country that had little connection with the actual conditions in the economy. Invariably, in Orwellian fashion, the plans were invariably officially “successful” regardless of their abysmal failure on the ground. That practice didn’t work out that well for the Soviets and I’m not sure it’s a plan for success here either.

Finally, while Congress has much blame for our current economic mess, they are only part of the legislative partnership. Luckily for them, in President Obama they have found soul mate. A week before his inauguration he told an audience: "Only government can break the vicious cycles that are crippling our economy -- where a lack of spending leads to lost jobs which leads to even less spending; where an inability to lend and borrow stops growth and leads to even less credit." Once in office he boldly set forth implementing the Democrats solution for the country. We had the Stimulus, the nationalization of the auto industry and student loans, the government takeover of healthcare and massive increases in regulation. And, if all that inept legislation were not bad enough in itself, his cabinet appointees, the people who actually implement that legislation intended to revive the economy and spur job creation, have less business experience than any cabinet in 100 years.

America faces a stark choice in November, one between a newly energized, free market solution oriented GOP (albeit having been dragged in that direction by the Tea Party movement – sometimes kicking and screaming) and a party of Democrats, who have pulled back the curtain to reveal what most of us assumed all along: They are economic illiterates. Their solution for creating jobs, reinvigorating the economy and putting America back on the road to prosperity is only to be found through government intervention. As the voters sit back and evaluate their choices, they need simply examine the success those Democratic policies have engendered everywhere from Detroit to California to the Soviet Union. Do they want to sign on for another American version of a Five Year Plan or is it time to give the free market a chance for a change?
Posted by Imperfect America at 3:07 AM