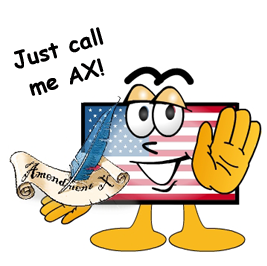 Mascots are a great way to inspire a team. My alma mater Florida State has the Seminoles, the hated University of Florida has the Gators and of course Notre Dame has the Fighting Irish. I would like to recommend a mascot to rally conservatives – and the GOP if they wish to come along – for the 2010 elections: AX. No, it’s not an ax nor is it the first two letters of AXE line of personal care products. Rather, as this involves government, it’s an acronym. AX stands for the Tenth Amendment, part of the Bill of Rights.

The 10th Amendment of the Constitution may simultaneously be both the most ignored and most important of all of the Amendments.

“The powers not delegated to the United States by the Constitution, nor prohibited by it to the States, are reserved to the States respectively, or to the people.”

Ignored because according to Washington, there is virtually nothing the federal government can’t do. Important because at some point the government will literally control everything and them Americans stop being citizens and simply become drones serving the all powerful state.

If this election stands for any single thing it is that government, particularly the federal government, has simply grown too big and too intrusive. To grasp how true this, imagine just one day out of your life: You wake up in a bed that has one of those “Under Penalty of Law” tags that warns that it must not be taken off by anyone other than the consumer. You head to the bathroom where EPA regulations determine how much water the toilet can use per flush. You head to the kitchen and pour cereal from a box that must be approved by the FTC and whose contents must pass FDA muster. Next you add sugar and milk that cost you twice what they might otherwise if USDA programs did not get in the way of free markets.

Now you get dressed and put your kids in your SUV, whose manufacturer and sales staff had to run the gauntlet of agencies: EPA, FTC, OSHA, NLRB, etc. just so you could have a car. After filling up with $25 of gas ($1.80 of which goes to federal taxes – and likely another $2.00 state taxes) you drop your children off at school where their fate lies in the hands of the Department of Education and a place where the teaching of American History and personal responsibility will likely never rear their ugly heads. Finally you arrive at work where things really get exciting as you get to mix and match with the entire spectrum of government acronyms: IRS, OSHA, ADA, FTC, NLRB, FCC, SEC, HHS… And we haven’t even touched on the things we really like to do from going to a restaurant to watching TV to flying on planes to surfing on the Internet.

At the end of the day Americans consider ourselves free, but the truth of the matter is that the only real freedom left is a sheen of speech and sometimes religion that surround a daily existence where the government’s hand is never far away.

James Madison, the Father of the Constitution was originally against a Bill of Rights in general and later the 10th Amendment in particular, because he felt they were unnecessary. He wrote in Federalist 45:

He acquiesced to, and eventually became an advocate for both because he understood that others saw a potentially darker side of government run by men and he knew that without such restraints there would be no Constitution.

Unfortunately, the last century has seen the 10th Amendment become nothing more than a fig leaf. While on a very rare occasion courts will strike down something Congress has done based on the limitations of the 10th Amendment, as the various rationales given by the Obama Administration for the Constitutionality of ObamaCare demonstrate, Democrats (and some Republicans as well) largely believe in simply doing what they want and then finding a Constitutional justification for it later.

For this reason I’m suggesting that the 10th Amendment become the mascot of the 2010 election – and then 2012 – with a simple mandate that requires new legislation to specify its specific Constitutional authority, as the GOP has put forward with their Pledge to America. More significantly however, this legislation would require every department and agency in the federal government to demonstrate the Constitutionality of its very existence as well as every single regulation or law it has in place. While I understand that is a massive undertaking, the truth of the matter is that burdensome federal regulations cost the United States millions of jobs and trillions of dollars in GDP annually.

Once the American people see that much that makes up the yoke of federal regulation under which they toil – as well as many of the departments and agencies from which such regulations stem – is based on nonexistent or spurious connections to the actual Constitution, they will demand that Congress expunge the regulations and shutter the departments.

Which brings us back to AX. Mascots provide a rallying cry that allows people from different backgrounds with different life experiences to focus on something they have in common. Resurrecting the 10th Amendment is just such an idea and if conservatives use it as the foundation for their platform of taking the country back from the cancer of progressivism I think they’ll find that most of America will be standing there right beside them cheering them on. GO AX!
Posted by Imperfect America at 4:32 PM