Post-racial America? Not so much for DC voters...

With the election of Barack Obama as President the United States was supposed to be transitioning to the post racial America. Unfortunately for the children attending the public schools of the District of Columbia, someone forgot to tell their parents.

Earlier this month the voters of the nation’s capital threw out Adrian Fenty, perhaps the best mayor they have ever had. Why? Because of soaring crime rates, plummeting school test scores or a surging unemployment rate? No. Rather, Adrian Fenty, a black mayor, was fired from his job because he hired the best people possible for the jobs in his administration and many of them happened not to be black. 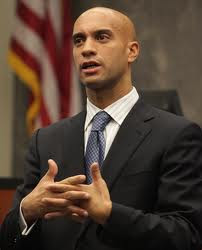 Like presidents, mayors are political animals. While the stakes they deal with may not be as global in scale the President’s, for their constituents, a mayor’s decisions are often more tangible and immediate. Presidents deal with federal tax policy, national defense and state dinners. Their actions affect 300 million Americans and billions more around the world. A mayor on the other hand deals with neighborhood crime, Rotary Club meetings and the local zoning disputes. Presidents rarely have to respond to anything immediately while a mayor’s immediate response or lack thereof (either good or bad) is usually chronicled in the local paper or leads the local news.

Because the mayor is so critical to the lives of the people in the community it is that much more perplexing that the people of Washington decided to vote according to race rather than success. Breaking with the past, Adrian Fenty decided that his measure of performance would be one thing: success.

And succeed he did. Washington DC has historically had some of the worst schools in the country despite spending more per pupil than most jurisdictions – this year they will spend almost $30,000 per pupil. During the 2002-2003 school year the city’s graduation rate was an abysmal 58%. Last year, after 4 years of Adrian Fenty the rate was 72% and heading higher. Not only are graduation rates increasing but test scores as well.

Rather than be hailed by the black citizens of Washington, who make up 57% of the city’s population and 82% of the student body, Fenty was shown the door to the tune of 80% of the voters. This is particularly disturbing because as the single biggest beneficiaries of an improving school system, blacks were benefiting the most from Fenty’s leadership. Whites on the other hand, who make up 35% of the city’s population but only 7% of the student body, gave him much support, well in excess of 80%.

This is not a liberal or conservative issue. Washington DC is a city full of liberals where Barack Obama received 92% of the vote while John McCain received just 7%. No, at the end of the day the Washington DC mayor’s race was about race rather than success, education, crime or otherwise.

Much of the black population in the city was angry that Fenty threw out the color bar when he decided to populate his cabinet. In choosing to fill his cabinet he chose the people who he thought could best serve the citizens of the District of Columbia. His resulting cabinet included 5 whites, 3 Asians, 1 Hispanic and 1 black. That was a problem for many in the city – particularly those in Ward 8, who are currently represented by convicted ex-mayor Marion Barry. The criticism started early in Fenty’s administration and to his credit he did not cave. He was called arrogant, uncommunicative and was frequently accused of turning his back on black Washingtonians. 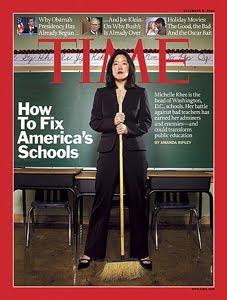 For the most part Fenty brushed off such objections believing that voters would instead look at the tangible benefits he was bringing to the city and its citizens. At the end of the day, Fenty did what mayors are supposed to do... tackle crime, improve schools and generally try and create an environment for success for the city’s citizens and his single biggest impact was felt in schools. They were where he shined. Fenty brought in Michelle Rhee as Schools Chancellor and she immediately went to work. She closed underperforming schools, she fired 241 teachers for poor performance and she forced the corrupt Washington’s Teachers Union to accept weaker tenure rules and even allow some performance based flexibility in compensation. Her results speak for themselves and Adrian Fenty believed, for him.

Not so much. Despite his success, 80% of the black population of DC decided Fenty had to go for the crime of being post racial. Inexplicably, rather than focus on what was actually making their lives better, from better educated children to safer streets, black voters in Washington DC decided to focus on the pigment in the cabinet. Unfortunately it’s likely to be their children who suffer as the unions and the old guard seek to roll back many of the advances that Fenty and Rhee put in place.
Posted by Imperfect America at 4:07 PM