In some respects liberals and progressives have it easy. All they have to do is look around and they can find problems for government to solve. Kids are too fat? Let’s get the government to decide how restaurants market their offering. Somebody walked away with a bad haircut? Impose government testing and licensing for barbers. Crime getting out of control? Let’s ban all guns. Someone loses their job? Let’s give them three years of unemployment checks. And just in case there were not enough real problems, liberals try and use government to solve problems that don’t even exist: global warming, disappearing polar bears and widespread discrimination of minorities.

For liberals the country is a boundless universe of problems just waiting for government solutions. The problem with that of course is that the supply of problems is literally endless. Most men are imperfect humans, and until they find a way to fix that, problems will always exist.

It is the ease with which liberals can point to problems and proffer ostensibly reasonable solutions that make it so difficult for conservatives to make headway, 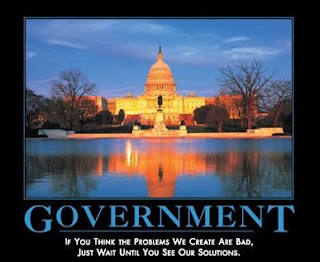 particularly with a population that is focused on things like American Idol, Facebook or Xbox. Of course those simplistic solutions often turn out to be anything but simple and more often than not resemble nothing like a solution. As an example, one of the driving forces of the economic malaise we find ourselves in today was the result liberal regulations forcing banks to give mortgages to people who should probably not have had them. Those regulations were government solutions to the “problem” of banks not making enough loans to minorities.

In a world where problems lay below every surface, around every corner and just in plain sight, it’s sometimes difficult to engage voters with a message that we don’t need more government regulation. When a kid is dead in the street of a gunshot wound or a family has lost its health insurance it can be challenging to carry on a rational conversation on the big picture politics of regulation vs. freedom.

Every now and then however a situation comes to light that so starkly discredits the liberal philosophy that even the least engaged citizen almost takes notice. Just such a situation is taking place in California, and it has nothing to do with the state slowly committing economic suicide via untenable regulations and confiscatory tax rates.

The situation to which I’m referring involves the conspiracy amongst environmentalists, the state and the federal governments to turn what is possibly the most fertile land on the planet into a desert wasteland, and take with it tens of thousands of jobs. I’m talking of course about the San Joaquin Valley. The Valley, which occupies much of the center of California from approximately Bakersfield in the south to Sacramento in the north, is the breadbasket of the United States, having in some years produced more than 25% of all the food consumed in the country. It produces everything from grapes to broccoli to tomatoes to rice to pistachios to milk and cream. It’s also a major producer of non food items such as hay and cotton.

In 2008, the Valley, already suffering the effects of a years long drought, was dealt a body blow by the government. That December the U.S. Fish and Wildlife Service 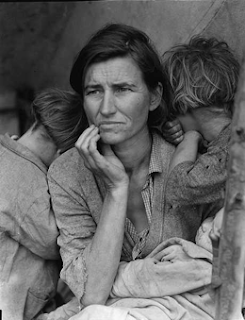 issued a “biological opinion" that imposed draconian water reductions on many farms in the San Joaquin Valley. Why? Because California is running out of water? No. Because there’s too much food and they wanted to reduce the supply? Plausible by government standards, but no. No, the government decided to cut off 100% of the water supply (later reduced slightly) of much of the Valley to protect a two inch fish called the delta smelt. The decision was the result of a 2006 lawsuit brought by the environmental group National Resources Defense Council. And the diverted water, is it being sent to other farmers someplace else? No. Is it being held in a giant reservoir for later use? No. It’s being dumped into the San Francisco Bay.

The predictable result of all of this is that not only is a wide swath of some of the most arable land on the planet turning into a dustbowl, but tens of thousands of farm workers are now unemployed and standing in food lines. On the state level, although the Governator claimed that were the decision up to him he would turn the water back on, when he had the opportunity to ask the federal government to review the decision he chose not to.

Not that it had to be this way. The government had much leeway in how it might have approached the “problem” of the delta smelt. Given all of the possible routes the bureaucrats might have taken, they chose the most heavy handed avenue possible and the result has been predictably bad. And it’s not even a matter of depraved indifference. This was a case of regulators actively seeking to advance the environmentalist agenda at the expense of jobs, families and communities. If there were any doubts about that the perniciousness of the government’s actions U.S. District Judge Oliver Wagner put them to rest on the 15th of last month, stating in his decision that the U.S. F&WS had acted in an “arbitrary, capricious and unlawful” manner when issuing their “biological opinion”.

Rarely are the ruinous consequences of progressive / liberal policies as rapid and stark as they are in the dying fields of the San Joaquin Valley. Nonetheless, ruinous they usually are. Be they banking regulations seeking to bring about social change, gun laws seeking to diminish crime or regulations seeking to guarantee every American health insurance coverage, progressives look at the troubled world as a place that must be fixed by government intervention.

Unfortunately, in addition to being pernicious and totalitarian, progressives are also immune to objective evidence of their failures. It doesn’t matter that the outcomes from their policies are usually the exact opposite of their stated objectives or cause irreparable harm to the unwashed masses who actually have to live with them. The only thing that is important is growing government control so that citizens can finally be saved from themselves and the negative consequences of their unenlightened choices.
Posted by Imperfect America at 1:00 AM