Conservatives are constantly being accused of wanting no government. When we talk about wanting to eliminate things like the IRS, the Departments of Energy and Education or rein in rouge agencies like the EPA and the NLRB we are accused of wanting no government at all. That’s simply false. I don’t think I’ve ever heard a conservative speak about wanting to eliminate all government, or even the federal government.

Most conservatives understand that the absence of functional government brings chaos. In an environment where chaos reigns, at some point someone will step in and impose order. That person or group then becomes the de facto government. Perhaps the clearest example of this in recent history was the Taliban takeover of Afghanistan in the mid 1990’s. Although pockets of resistance remained, by the late 90’s the Taliban were firmly in control of the country. Most Afghanis didn’t like the Taliban, but they appreciated the relative order they brought to the country.

Here in America our problem is not a lack of government, but the opposite, too much of it. The strings of regulation end up wrapped around the wheels of the American economy and ends up clogging what might otherwise be a well oiled machine. An unfettered economy would not be flawless, but it would be far more dynamic than the straitjacketed one we have today.

To put this in perspective, take the IRS tax code. According to the Heritage Foundation, it will cost America just more than $400 billion in 2011 to comply with the tax code, and that does not include the cost of the actual taxes themselves. Given that the federal government will take in approximately $2.2 trillion in taxes this year, that means Americans will spend an additional 20% of their tax bill just trying to figure out how to pay the bill in the first place!

How is that even possible? Well, the tax code is approximately 72,000 pages long and it’s broken down into 750 subchapters. Imagine if you are a widget manufacturer with 10,000 employees spread out over 20 states. How many employees would you need to have on staff to make sure that that company was complying with the regulations written on every one of those 72,000 pages? How much time (read: money) would your accounting and legal staffs have to spend to ensure that everything you did was within the IRS’s guidelines? How much time would management have to waste evaluating what product or service to provide or what energy provider to choose depending on what provides the best tax advantage? How about deciding how employee benefits should be allotted between taxable and non-taxable to maximize employee compensation?

As difficult as scenario is, at least large companies can pay for the necessary accounting and legal staffs. Imagine you are a struggling businessman with 5 employees who has to choose between spending money on another employee to help him compete in the marketplace or on someone to decipher the 72,000 pages of the IRS tax code. The fact that an employer (or homeowner or parents of a college student or someone approaching retirement…) has to base many of their financial decisions on what the IRS rules are is bad enough, but for the rules to be so numerous and incomprehensible that it restricts productivity borders on criminal. And to put a cherry on top of it, all of that effort is spent just to figure out how to give the money to the government so they can spend much of it on stuff you'd never pay for if you had the choice. 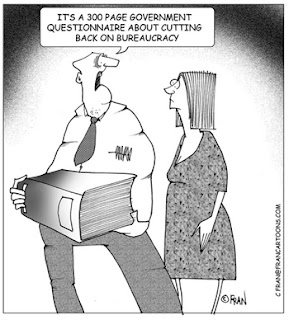 Lucky for Americans, the tax code is not the only sign of a government gone wild. There is also the Code of Federal Regulations (the codification of the general and permanent rules published in the Federal Register by the executive departments and agencies of the Federal Government). The Code covers 163,333 pages, in 226 books. Those are the regulations that cover everything from that ticket on your mattress to the kind of gas you can put in your car to how long an airline can delay a flight to what can be labeled diet in the supermarket to the endless pages of directions and warnings provided with medicine bottles. Unless you are living in Ted Kaczynski’s summer home, not a day goes by that you do not cross paths with hundreds or thousands of these regulations. Like microwaves, you may not see them, but they are there nonetheless, impacting everything from hiring (or not, as the case might be) or marketing or investment decisions for everyone from Fortune 500 companies to neighborhood entrepreneurs.

The Competitive Enterprise Institute estimates that federal regulations cost Americans $1.75 trillion each year. That includes everything from environmental regulations to cable rates to the number of hours employees can work to months of tax compliance research. Add to that the $2.2 trillion Uncle Sam collects in taxes and you have almost 25% of our GDP being directly driven by government. Given the suffocatingly large and restrictive presence of government in our lives, is it any wonder that our economy is moving along at a dying snail’s pace? How many life saving medicines, technological breakthroughs, or even things as simple as more comfortable shoes have not been realized because we waste so much time and money focusing on regulation and compliance? At the end of the day conservatives don’t propose no government, just limited Constitutional government. We’d like to free up the American people to transform this moribund economy into a juggernaut of creativity, productivity, jobs and prosperity. That can’t be done while they are being strangled by government rules and regulations…

Posted by Imperfect America at 2:55 AM