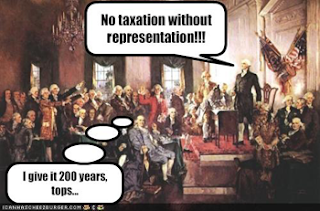 In the United States we take taxes very seriously. Indeed it’s in our blood. One of the key reasons for the American Revolution was taxation without representation. The Colonists did not like the idea of paying taxes to England without having a voice in how those funds would be levied or spent, i.e. they didn’t have representation in Parliament. In some cases they had representation in a state assembly, but the local legislature was in all cases trumped by the government in England.

Building on that initial connection between voting and taxes, in 1964 the 24th Amendment to the Constitution made it explicitly clear that no one could be barred from voting because of a failure to pay any tax. The primary target of the Amendment was Southern states who were limiting the rights of blacks by imposing a poll tax. The Amendment however did not ban simply poll taxes but rather any “other tax” as a bar to elections.

The goal of barring discrimination of black voters was of sufficient consequence that it deserved a Constitutional Amendment. The problem however is that by adding the words “or other tax” the government sowed the seeds for its own demise.

How? By permanently severing the relationship between those who finance the government and those who control it. Today, 51% of income earners pay no income tax at all, while the top 10% pay 70% of all income taxes. In addition, 30% of “taxpayers” actually earned money from the government in the form of refundable tax credits while those on welfare are not counted in the pool in the first place.

Progressives often respond that everyone pays Social Security and Medicare taxes. That is true – assuming someone is employed. In the federal system we have five primary forms of taxes:

First of course is the aforementioned Social Security. Social Security taxes are ostensibly taken from employees to fund (or ideally to supplement) their retirement.

Then there is Medicare, also taken from paychecks, which is intended to provide health insurance to those over 65.

Next there are excise taxes, taken with the specific purpose of supporting particular government programs and funded by the people who use those services. These would include things like gasoline taxes going to pay for transportation projects and airport fees to support airport maintenance and operations.

Then we have the corporate income tax, which is levied on corporate profits. These taxes go into the general fund and are intended to pay for the normal operations of the federal government.

Finally there are personal income taxes. These taxes are often the largest single component of the federal government’s revenue, and like corporate income taxes they are intended to fund the general operations of the government.

Here is the error of the progressive argument. The taxes paid by the bottom 50% of income earners (and those who earn no income) are for either retirement support or to pay for a used service, not the general operation of the government. As such, they are paying no taxes to support the actual functioning of the government. The fact that Congress has been raiding the Social Security “Lockbox” for decades does not change this fact. As long as the government is functioning, Social Security recipients will be the senior creditors on any government expenditures… and it is the people who pay the taxes who will have to make good on those IOUs.

Neal Boortz asks the question: should the vote of a welfare matron on the government dole with a five children be equivalent to the vote of a small businessman who pays $25,000 in income taxes and has 10 employees who support 20 other family members? The obvious answer would seem to be no. Certainly no more than it makes sense to allow your neighbor to negotiate with your boss how much of your salary you will be allowed to keep and how much your neighbor gets to take home in exchange for a kickback to the boss.

Is it now time to flip the colonist’s battle cry on its head? Should there be representation without taxation? Can the United States survive with a growing majority of her population contributing nothing to the running of the government, or increasingly, being net consumers of government largesse? This is not a new issue. "A democracy cannot exist as a permanent form of government. It can only exist until the majority discovers it can vote itself largess out of the public treasury. After that, the majority always votes for the candidate promising the most benefits with the result the democracy collapses because of the loose fiscal policy ensuing, always to be followed by a dictatorship, then a monarchy." That quote is sometimes attributed to Alexis de Tocqueville and sometimes to Alexander Fraser Tytler. Regardless of its provenance, the notion is spot on. One need look no farther than today’s dysfunctional federal government to recognize the writer’s prescience.

Not only is the government taking all of its income taxes from the top 49% of income earners, but at the same time it’s borrowing trillions of dollars (that those same taxpayers will have to repay) to redistribute to tens of millions of others who are not paying any income taxes. The logical progression of this cleptocracy will be that eventually the most productive members of society will seek refuge in countries where they can enjoy the fruits of their labor. Where will the government look to then as it seeks to fund its redistribution of wealth?

Perhaps now is the time for another Amendment. One that states simply: “In order to be eligible to vote in federal elections a citizen must have paid federal income taxes in one of the previous three years.” Absent that, perhaps it’s time to consider a flat tax, or even better, the Fair Tax. None of these solutions will solve our fiscal problems on its own. Without spending cuts and a smaller, limited government the Grand Experiment is doomed. Creating an exclusive connection between voting and those who pay the government’s bills is a good first step however.

Posted by Imperfect America at 2:10 AM