Beyond Mitt... the Conservative challenge to saving America

In 1990 I knew everything I needed to know about Rush Limbaugh. He was a racist. He was sexist. He was an arrogant, rich SOB who didn’t care about the poor. He was a fool who knew nothing about how the world worked. How did I know these things despite never once having listened to his program? Via the media of course. Despite having a Bachelor’s in Political Science, I paid very little attention to actual politics. As a grad student I paid cursory attention to the news and didn’t much venture beyond what I saw on ABC news.

One day while arguing about Limbaugh something of an epiphany was forced on me by my roommate. He simply asked, “Have you ever actually listened to him?” As I stammered a bit I had to admit that I had not. It dawned on me that I was speaking quite authoritatively about someone I knew so little about… Hence the epiphany. Not about the nature of Limbaugh, but rather about the notion of taking what media says about someone or something as gospel. Today I take virtually everything I hear or read with a grain of salt. When possible I compare what I’ve heard with what I know firsthand. When that’s not possible I make sure that I look to sources I trust for corroboration.

As for Limbaugh, I started listening to him and it took a while for him to grow on me. At first blush he’s rather bombastic and just a wee bit arrogant. After a while however it became clear that at the core, he is, as he puts it “Right, 99.7% of the time”. One might not always appreciate his particular brand of commentary, but, far more often than not he is spot on in terms of the point he is making.

To this day, despite having the most popular and profitable radio program in the United States, Limbaugh remains a polarizing figure. He is a convenient lightning rod for the left as they seek to mischaracterize the conservative message he promotes. And they have done a great job of disparaging conservatives. From a sexist Rush Limbaugh to the Tea Party racists to Paul Ryan seeking to throw Grandma off a cliff, the left in general and the media in particular have done a spectacular job of misrepresenting conservatives to those who are like I was twenty years ago, too busy or lazy to look at the facts. 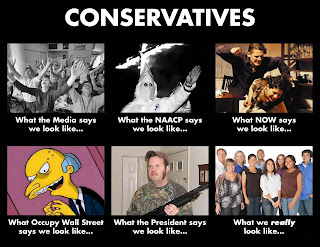 As such I’d like to provide a little reality to the way conservatives are characterized.

Myth: Conservatives are racists.
Reality: Conservatives focus on the rule of law and individual responsibility. Conservatives generally oppose affirmative action programs not because they hate minorities, but rather they believe in the words of Martin Luther King, Jr. that Americans should “Not be judged by the color of their skin, but by the content of their character.” Conservatives don’t believe that government contracts or school admissions should be forced to reflect the specific demographic makeup of the United States any more than the NBA or NHL should be.

Myth: Conservatives don’t care about the poor.
Reality: Conservatives care greatly about the poor and needy, they just don’t think government is the solution to the myriad problems that the poor face. Indeed, in his 2007 book “Who Really Cares: The Surprising Truth About Compassionate Conservatism” Arthur C. Brooks shows that conservatives, or people who disagree with this statement, "The government has a basic responsibility to take care of the people who can't take care of themselves," are 27 percent more likely to give to charity than liberals. Conservatives don’t hate the poor, they simply don’t believe that failed government redistribution programs are the way to lift people out of poverty. They believe that communities and churches and private organizations would do a far better job.

Myth: Conservatives love big business.
Reality: Conservatives certainly love business because they recognize that America’s capitalist system has generated more wealth and improved the condition of man more than any other economic system in the history of the world. However, conservatives are actually frequently at odds with big business because of the cozy relationships big, established businesses often nurture with politicians and bureaucrats to the disadvantage of their smaller competitors. Conservatives would rather see big companies go bankrupt so that their assets can be rationalized rather than having the government support them and distort the markets. Failure and reinvention are, after all, at the core of economic success.

There are of course many other myths the left has successfully propagated about conservatives that have manifested themselves into our political landscape. That’s a problem for conservatives in general and in particular for the kinda / sort of conservative Mittens Romney. The economic foundation of the United States is not going to be saved by simply putting Barack Obama in the unemployment line, although that is certainly a necessary first step… 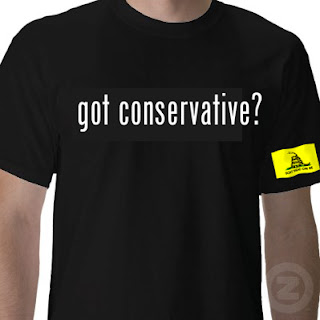 Rolling back the government and unleashing the economic might of the United States is going to take a conservative Congress sufficiently motivated to make the hard choices and be willing to bear the arrows of a cornered left. And this is where the tire hits the road. Conservatives have to stop allowing the left to define what conservatism means. Rush does a great job of energizing the base, but the reality is not everyone is lucky enough to get pushed into an epiphany as I was. Not everyone will be on board with everything in the conservative agenda, but 90% agreement is better than 10%... at least then we'd still have a country to talk about.

Conservatives must make crystal clear the choices Americans face. It’s not between mending Medicare and killing Grandma. It’s not between closing the Department of Education and illiterate children. It’s not between cutting taxes and starving the homeless. It’s between the Republic and failure. Conservatives need to take a page from the dairy farmers with their Got Milk moustaches and tee shirts. Find an engaging and compelling meme to highlight the conservative message and invite Americans to understand what it means. If you get people talking about the real issues then the possibility exists to bring them over from the dark side. I wonder how James Earl Jones would look in a "got conservative" tee shirt…
Posted by Imperfect America at 5:36 AM