Barackalypse Now, the story of one man's destruction of the American Dream

By now you have figured out that Armageddon did not occur on Friday and the dire warnings from the White House that the nation would essentially collapse were, shall we say, somewhat overstated.

That doesn’t mean however that the nation and American prosperity is in any less danger. Barackalypse Now is indeed upon us, and it has nothing to do with the Sequester. It has everything to do with the deranged economic policies of the Obama administration. 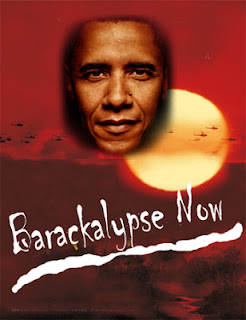 Virtually every American would like to be a little better off tomorrow than he or she is today. It makes no difference whether they are rich or poor, or whether they are happy with their current circumstances. Most of us would simply like to be a little better off next year and the years after than we are today.  Most of us don't mind working to make that a reality, but the question is, how we can accomplish it.

One way many people have chosen to pursue the American Dream has been to start their own businesses. The goal of entrepreneurs is often a mix of trying to become wealthy and doing something about which they are passionate. Every single company you know the name of or have interacted with started out at some point as just an idea that someone sought to do something with. Two such companies are Subway, the largest sub sandwich restaurant chain in the world and Home Depot, America’s largest home improvement chain. Both have thousands of locations, do billions of dollars a year in revenue and employ hundreds of thousands of people. Both companies started out with one unit each and grew into the 800 lb gorillas they are today. Interestingly, the founders of both companies say that if they started their companies today they could never have succeeded. And it has nothing to do with the recession, indeed Home Depot was founded in 1978 in the midst of the worst economic recession since the Great Depression.

Both founders cite government regulations for the reason that they could not succeed. Fred Deluca, the founder of Subway says:


It's continuously gotten worse because there's more and more regulations and it's tougher for people to get into business, especially a small business. I tell you, if I started Subway today, Subway would not exist, because I had an easy time of it in the '60s when I started and I just see a continuous increase in regulation.

Bernie Marcus, co-founder of Home Depot says this when asked why more businesses don’t complain about the regulatory burdens:


They are frightened to death — frightened that they will have the IRS or SEC on them. In my 50 years in business, I have never seen executives of major companies who were more intimidated by an administration.

Although overregulation has been getting worse for decades, the Obama administration has put the regulatory apparatus on steroids and uses the coercive power of government to intimidate businesses into submission. The result is that large companies like Home Depot, Subway, Google, Wal-Mart and others can hire armies of lawyers to bring them into compliance or find loopholes through which they can maneuver. Small businesses however, the fount of jobs, with their limited resources and bandwidth simply can’t compete. The result is that big companies get bigger and fewer competitors emerge as success as an entrepreneur becomes less possible.  It’s ironic that the administration that was so quick to embrace Occupy Wall Street’s disdain for big business has actually helped big business by suppressing potential competitors. 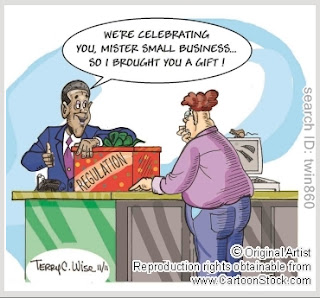 Another way Americans seek to improve their lives is to find a good paying job. Here too the Obama administration has punched the average American in the solar plexus. Perhaps no single regulation has had more negative impact on jobs in the economy than has Obamacare. The regulations are not yet fully implemented but they are already causing a disaster in job creation. Across the country employers are shifting employees from full time (defined as 30 hours or more a week) to part time status so that they can avoid the taxes associated with Obamacare. The result is that fewer people will have full time jobs and must take two or three part time jobs to make what they would have at one full time job. That is the definition of inefficiency. From a quality of life perspective Obamacare is going to result in parents spending more time out of the house as they work their two six hour jobs with two hours in between or they work seven days to earn a full time equivalent paycheck. Even without families, everyone is going to have less leisure time to do everything from go to restaurants, the movies, the beach, play sports, read books or whatever it is they love to do.   The small businesses lose out as well. While they may avoid paying the Obamacare taxes for a while, they now have to provide the training, scheduling, management and administration support for more employees than they would if they could fill their jobs with full time employees.  Obamacare is a job killing machine, and with it goes the dreams of millions of Americans who were hoping that a job would help them achieve their life's goals.

With a flawed government focused mindset, his administration has already accomplished what Barack Obama suggested it would take two terms to finish: “Fundamentally transforming the United States of America”. Unfortunately for those seeking to pursue the American Dream, the Barackalypse he has created has little resemblance to the dynamic America whose engine drove our own and the world’s prosperity for a century. At some point in the future when anthropologists discover the ruins of what was once America they will wonder what kind of Apocalypse could have destroyed such a great and powerful nation. One wonders what curious artifacts will remain that indicate the damage was self inflicted when the citizens twice elevated to their presidency a self aggrandizing man with no understanding of how the world actually works beyond the chimerical fantasy created in his mind and perpetuated by a cabal of empowering sycophants. Perhaps the story the write will be "Barackalypse Now, the story of one man's destruction of the American Dream".
Posted by Imperfect America at 1:26 PM