Obamacare - What good is health insurance if you lose the freedom to live your life as you choose?

One of the many reasons conservatives dislike government overreach is because government is so often wrong about so much. And what’s worse, regardless of the magnitude of the government’s failures, citizens are stuck with the consequences of those policies, in most cases forever.

This is not a new phenomenon. This has been going on for decades. Upon its establishment in 1965 the House Ways and Means Committee estimated that the cost of Medicare would rise to $12 billion by 1990. Unfortunately for American taxpayers that prediction was off by a power of nine, coming in at $110 billion. And things haven’t gotten any better since then. By 2011 Medicare costs ballooned to over $550 billion, having grown by 8.3% in a year when inflation was 3.2%.

But of course Medicare is but one example. Medicaid had a similar experience. The same House committee estimated that Medicaid’s first-year costs would be $238 million. Instead it came in more like $1 billion. It was projected to cost $9 billion by 1990 and, surprise, it came in at $67 billion. By 2011 the federal share of the program tipped the scales at $299 billion!

Tellingly, before government set its claws into healthcare it tracked very close to overall inflation. Since 1965 however, healthcare costs have increased by 2.3 times the rate of general inflation. To put that in perspective, inflation would have made something that cost $100 dollars in 1965 cost $718 dollars in 2012. That’s a pretty big jump, but if that $100 dollar item had increased at the rate of healthcare inflation since government got involved it would cost 2.3 times as much, or $1,651. At the same time, healthcare costs went from 5.1% of GDP in 1960 to approximately 18% today. 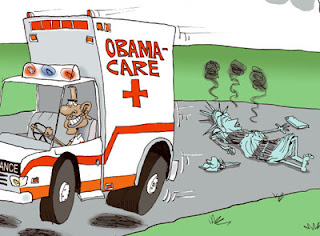 This record of financial incompetence (nevermind operational incompetence and malfeasance) could never survive for five decades in the private sector. But in government, no problem, and it’s not just healthcare. Think of Solyndra. Think of General Motors. Ethanol mandates. School lunches. The fact of the matter is, bureaucrats sitting in the otherworldly universe of Washington have a long history of making decisions about which they are unqualified and ill-informed, and more importantly, disconnected from the consequences of those decisions.

Now however we are about to embark on a journey that will make even the economic disaster of Medicare look like child’s play. Of course we’re talking about Obamacare. Although there were many warnings that Obamacare would be a disaster of epic proportions before it became law, today, less than a year from its true implementation, we are seeing the actual consequences begin to materialize. 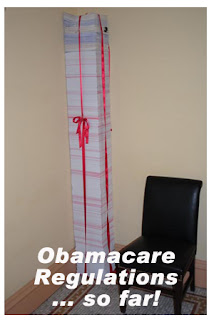 Millions of jobs will be lost, one small company at a time. People will have a difficult time finding a full time job. Healthcare premiums will be going up. There will be a doctor shortage. Obamacare will become a regulatory anvil around the neck of American prosperity. Luckily though the Obama administration is on the job seeking to ensure that it doesn't become a "third world experience". Which, it's looking like it just might become. And to put a cherry on top, with our practically no existent GDP growth, apparently we can look forward to China overtaking the United States by 2016.

As bad as those things are, it actually gets worse. Your individual liberty is simply going to disappear. Many employees are now going to have to begin reveling to employers their weight, body fat measures, cholesterol levels and more. Pharmacy giant CVS states that all its employees will now have to either quit smoking or enroll in an addiction program by 2014. That is of course because smokers generally have higher healthcare costs than do nonsmokers, and since CVS is paying for that healthcare, they get to make the rules. Don’t like it? Then quit.

But then it’s not only smokers who cost more. Fat people generally cost more than thin people. Does that mean that a company can dictate that employees must be Oreo or Doritos or Coke free by the end of the year or enroll in an addiction program? How about motorcycle riders? They are 5 times more likely to be involved in a traffic accident than are car drivers. Does that mean that companies can tell you what you what kind of vehicle you can drive? How about unmarried women having sex out of wedlock, particularly minority women, where 77% of black births and 53% of Hispanic births are to unwed mothers? Given that sick children inflict an increased financial & healthcare burden on unwed mothers than they do on married mothers, can a company demand that unmarried female employees purchase and utilize birth control? (If so, how would they ensure compliance with usage?) Sure, all of this sounds farfetched, but so too once did the idea of schools telling moms what they can put in their children’s lunchboxes, cities banning Happy Meals and soft drinks and companies actually firing employees for being smokers.

At the end of the day, Obamacare may very well be the last stake in the coffin of individual liberty and American prosperity. Think of it this way… through the tax code the government already exercises a tremendous amount of influence on your life by deciding how much of your money you can keep. It’s pretty personal, but it’s largely financial, even if it impacts much of the rest of your life. Through the EPA the government influences your life, although thankfully for most of us it’s at an arm’s length, via regulation of the companies we work for and the firms we buy from. With Obamacare that scant remaining barrier between government and individual choice will disappear. Government is indirectly harnessing employers to expand its power over every aspect of your life, including the most intimate parts of it. And you can be sure it will stay indirect for only so long. Once government mandates can decide what you can eat, how much you have to exercise, the kind of transportation you choose and how you have sex, what is left of liberty? Not much… Add to that the evisceration of the greatest economic engine the world has ever known and you wonder how long before it all comes crumbling down. Now where does one go to get insurance to protect against that?
Posted by Imperfect America at 2:25 PM