One has to wonder what Einstein would think of the left’s continued desire to inflict centralized planning on the citizens of the United States. Central planning has been a failure virtually every time it’s ever been implemented, whether in the Soviet Union, Venezuela or here. And we’ve seen a lot of it here, and, not surprisingly, a lot of failures. Education, check. Mortgages, check. Welfare, check. Amtrak, check. We are already seeing the wheels coming off of their most recent foray into state control, Obamacare. 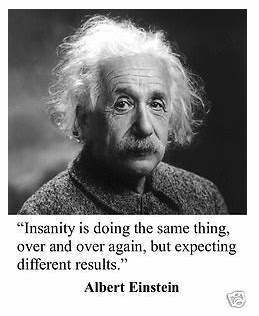 Despite everything we’ve seen, despite the track record of abysmal failure, liberals seem to think that centralization can solve everything. As disheartening as liberalism’s failures are in the social and education spheres, the real tragedy is what they have done in the economic sphere. It’s economic prosperity that gives liberals sufficient benefits that they have the luxury to chase their fantasy of a world filled with lollipops and fairness. And they are killing the golden goose.

The thing that liberals don’t get is that prosperity doesn’t come from some grand master plan. Rather, prosperity is the result of people taking risks, people working hard, and yes, people seeking to win. American prosperity is the result of billions of decisions made by millions of individuals over the course of two centuries. Decisions to risk everything to start a business. Decisions to start again after one or five or ten failures. Decisions to ignore conventional wisdom and take the road less traveled. Decisions to put a road where one didn’t previously exist. Decisions to invent things that seemed impossible. American history is replete with millions of stories of courage, perseverance, industriousness and optimism. Many of those stories you and I will never hear about or know about, but that doesn’t mean we don’t benefit from them. We do, because those entrepreneurs, innovators, inventors are the oxygen that keep the American economy from collapsing in the face of the left’s burdensome regulatory state. The problem is, as the regulations increase fewer and fewer people have the strength to withstand the onslaught of paperwork and fees and the intimidation by a burgeoning regulatory apparatus.

It might be worthwhile for liberals to look at how we got here in the first place.

Why did most of the inventors and entrepreneurs and innovators who created our prosperity take those risks? There are probably as many reasons as there are dreamers, but one thing is for certain, most of the people who helped build the most prosperous nation in the history were driven by a desire to improve their lot in life. Most of them didn’t come from a life of privilege. Most of them didn’t grow up in risk free bubbles where everything was provided to them by some government agency. Indeed most of them came from middle class households (or below) and wanted to create something better for themselves and their families. Not sure that’s true, check out this year’s Forbes 400 list. Of the 400 richest people in the United States, fully 68% of them made the list as a result of their own efforts, not because they were born in a golden bassinette or with a platinum spoon in their mouths. 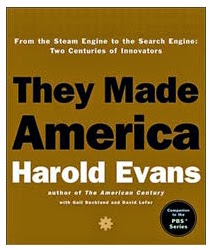 A better source might be something call Prosperity’s Bible. That’s not the real title, but it’s appropriate. The actual title of the book is They Made America. From Robert Fulton, Samuel Colt and Cyrus McCormick to Juan Trippe, Ted Turner and Steve Jobs, it’s full of two centuries of the most important innovators, inventors and entrepreneurs in American history. These men – and a few women – built things, invented things, but most importantly, changed things. They helped drive a tiny nation of immigrants to become the most prosperous nation in human history. And they brought their fellow man along with them by creating jobs, opportunity and a dramatic improvement in the standard of living around the world. And in many cases, from Carnegie to Rockefeller to Gates, after they created it they gave much of their wealth away for the benefit of others.

But virtually none of these giants did what they did (except perhaps some of the railroad barons) at the behest of the government. Amadeo Giannini didn’t lend money on a handshake after the 1906 San Francisco earthquake because of any government mandates. Garrett Morgan didn’t invent the gas mask and the traffic signal in pursuit of government contracts. Chemist Leo Baekeland didn’t leave Belgium because there was no government support for his research – there was, plenty – no, he came to America to build a business… which he did, and one of the things he invented was plastic. Rockefeller didn’t rationalize the petroleum market to support some government regulation… although he did save the whales in the process.


And that’s the key to why liberalism has always failed, and always will fail.  It seeks to replace individual drive, individual achievement, and individual responsibility with government mandates, government support and most perniciously, government regulations… all enforced by nameless faceless bureaucrats who have no idea what it takes to succeed in the real world most of us live in.  Liberalism seeks to remove the risk of failure from the human condition.  It seeks an equality of outcome separate from an equality of effort. It seeks to restrict anything that might ever have a negative outcome.   It seeks to mold a world made of imperfect people into a perfect Stepford world where everyone is the same, no one has more than their share and everyone is told what they can’t do and what they must do by regulatory busybodies.

Obamacare is just the latest in a half century long march of mandates, regulations and other aspects of centralization that have gutted American prosperity and in the process created tens of millions of wards of the state who have no desire to, nor understanding of how to pull themselves up by their bootstraps and go out and make something of themselves, create prosperity for their families and their country, to change the world by doing something of consequence.

Americans of all stripes could benefit from picking up a copy of They Made America. It shows in black and white exactly what it takes to create prosperity on an unprecedented scale. If liberals picked it up they might finally recognize that success can’t be mandated but it can be inspired and stop living up to Einstein’s definition of insanity.
Posted by Imperfect America at 5:02 AM