Some unsolicited advice to Barack Obama on Syria

What happens when a majority of voters elect an unqualified hack as the head of state? Lots of bad choices and lots of bad outcomes. After watching Barack Obama make mistakes on the world stage for five years you might have thought he was beginning to figure out what he was doing. Unfortunately, you'd be wrong.  He’s as clueless as ever…

First he suggests (correctly) that as Commander in Chief he doesn’t need Congress’s permission in order to act militarily in Syria. Then he proceeds to ask Congress for authorization to do just that, with the absurd suggestion that somehow the rest of the world will look differently on the missiles raining down on Syria if there is political unity along Pennsylvania Avenue. Does Barack Obama even understand what the role of the Commander in Chief even is?

So he’s a little confused about what his actual role in running the military is… not particularly surprising given that before being elected to the most powerful position on the planet the only thing he ever ran was a community organization and some law school classes. At least he’s sure why he’s decided a military attack is necessary… because he drew a red line in the sand and wanted to be very clear to the Assad regime that if “we start seeing a bunch of chemical weapons moving around or being utilized, that would change my calculations, significantly…” That is a pretty clear statement. Or maybe not.  Somehow that clear statement has morphed into “I didn’t draw a line in the sand…” Perhaps President Obama should ask his friend Al Gore about the thing called the Internet where he can look up what he actually said.

Whatever the message Barack Obama was hoping to send to Assad and the rest of the world, I’m pretty sure it’s not the one of fecklessness and ineptitude they're getting. In addition to misunderstanding both his role in leading the military and forgetting who drew a line in the sand, he’s lost any element of surprise by telling Assad what to expect and not to worry because nothing is going to happen before Congress finishes their deliberations. And he also let Assad know that regime change is not the goal.

Then there is the Secretary of State’s constant pronouncements about the makeup of the rebels, who any bombing would ostensibly benefit: “I just don't agree that a majority are al-Qaeda and the bad guys…” he told a House Foreign Affairs Committee. Unfortunately, one of the key advisors to the administration on the issue of the rebels has been Elizabeth O’Bagy, who, it turns out, is a paid propagandist for the rebels themselves. So it appears that the main source – or at least a significant source – for the President’s contention that the rebels are good guys is someone who’s paid to tell the world… that the rebels are good guys. No problem there. Interestingly in a moment of morbidly vaudevillian juxtaposition, in the very week the Secretary of State is trying to convince Congress of the benign nature of the rebels, a video surfaced of those very rebels cold bloodedly executing captured Syrian soldiers as they lay kneeling on the ground.

All of this showcases a President who is simply not up to the task of successfully leading the nation during a crisis on the international stage. It might be one thing if this was fresh ink on a newly minted presidential canvas, but it’s not. From Iran to Iraq to Libya to Egypt we have seen this president in the starring role in a series of movies that went very badly very quickly. Taken together all of this suggests that whatever Barack Obama chooses to do in reference to Syria, things will turn out badly for the country.

Sending some cruise missiles seems to be the solution of the day. Of course bombing Syria could have a vast array of unintended consequences. It may provoke Syria and or Iran to attack Israel. Russia has already said it will support Syria if it’s attacked and it appears that China is sending ships to the region. An attack might destabilize Syria in such a way that the rebels take over and we see another failed state like Libya or the ascent of an al-Qaeda affiliated power like in Egypt. An attack might cause Assad to use even more chemical weapons just to demonstrate that he cannot be intimidated. Worst of all, the possibility exists that somehow the US is sucked into a situation where it does indeed require American boots on the ground, this time without any real understanding of what victory is, what it would look like or how to achieve it. We can't forget the outcome the President is hoping for, that Assad will realize that crossing Barack Obama is a dangerous game and he then decides to stop killing innocents in his own country - at least with chemical weapons.

Then there is the option of doing nothing. If you listen to the President and his supporters, taking no action might result in Assad using chemical weapons again – assuming it was he who used them in the first place – and will embolden not only Assad, but Iran, North Korea and many other not-so-nice regimes around the world to do whatever they want with impunity. 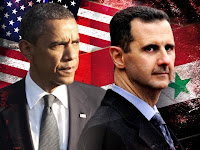 Of course doing nothing is not the opposite of bombing. Doing nothing is one option, but so is crafting sanctions and seeking worldwide condemnation. Sanctions rarely work of course, but perhaps by convincingly laying out his proof Barack Obama can use his oft touted charm to win over the whole world on the side of effective sanctions. One wonders if Russia and Iran will be susceptible to such a charm offensive?  Another option would be to equip Assad's enemies to overthrow him, assuming any can be found who are actually pro-American, or at least not anti-American.

At the end of the day Barack Obama's poor performance over the last five years has left the country with few good options. Given the pickle he’s created, I’d like to give President Obama some unsolicited advice.


Finding an alternative to bombing is likely your best option, and if the case for sanctions is made forcefully and effectively, it might actually work.  If nothing else it might get some allies on our side and create something similar to the "coalition of the willing" George Bush assembled.  If, however, you are sufficiently confident that Assad is a threat to the country and her allies that military action is necessary, your message on Tuesday night  – rather than being a argument for why Syria should be bombed – should instead provide background on a strike that is taking place at that very moment.

If he is seeking to send a message, seeking to show actual leadership and has decided to bomb Syria regardless of what Congress does, he should strike quickly and with overwhelming force rather than wait until Congress says it's OK and then inflict some limited pinprick of an operation. If the goal is to show the world the negative consequences of using banned weapons then the resulting pain had better be pretty harsh, otherwise the world will recognize the US as the paper tiger it has become under the ill-equipped president the American voters have inflicted on the world.

There are some important if’s in that paragraph, but uncertainty and bad choices are what you get when a nation chooses to elect such an unqualified man as its head of state. Let's hope he doesn't fumble us into WW III.
Posted by Imperfect America at 2:54 PM