Congress allows Barack Obama to exercise his inner John Marshall... and they will live to regret it.

In 1803 Chief Justice John Marshall changed the face of American government. He did it in such a subtle way that few people understood the consequences of his act at the time. After losing the election of 1800 and in an effort to thwart the power of victor Thomas Jefferson, John Adams sought to place dozens of party loyalists into various positions in the judicial system. He made the appointments and signed the commissions. Some of the commissions were delivered by the time Jefferson took office. Others were not and the new president simply ceased delivery of those, positing that with the commissions undelivered the appointees could not take their seats. One of those commissions belonged to Maryland’s William Marbury, who promptly sued to have the commission delivered. 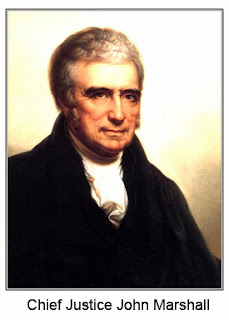 The resulting case, Marbury vs. Madison, would change American government forever. Although Marshall was a Federalist like Adams, and sympathetic to Marbury’s plight, he decided that the Supreme Court could not force the Democratic-Republican Jefferson’s hand, despite Marbury’s right to his commission. He wrote that that although Marbury had indeed been wronged, the manner in which he sought relief was unconstitutional, because Congress had overstepped its bounds when it passed that aspect of the Judiciary Act of 1789.

And this is where Marshall’s shrewdness becomes apparent. For the first time the Supreme Court acted via judicial review, which is the notion that the judiciary gets to decide what is Constitutional and what is not. Rather than antagonize the new president and congress however, Marshall did exactly what they wanted, he let them win by allowing the commissions to go undelivered and therefore keeping the Federalist partisans off the various bench seats. In giving the Democrat-Republicans what they wanted he assured that they would not challenge the decision, and by extension his assertion that the courts had the power to overturn Congressional legislation it deemed unconstitutional, something not actually in the Constitution. In essence by not objecting to Marshall’s interpretation of the Court’s power, President Jefferson and the Congress were acquiescing to that interpretation and setting a precedent that has lasted for over 200 years and set a foundation for the plague of judicial activism that would emerge in the next century.

That is often how power gets shifted in a relationship – whether it’s a marriage or a government or between nations – with one party acquiescing to another party’s play until the point where the shift becomes accepted as natural.

Congress to its great discredit, is doing the exact same thing that Jefferson and the Congress did 210 years ago, they are acquiescing to Barack Obama single handedly rewriting the Constitution, something it has done before, when the President has used various directives to essentially implement the Dream Act without Congressional action. By using executive fiat to decide who stays and who can be deported the president is explicitly ignoring laws passed by Congress and signed by previous presidents. Can one imagine if Richard Nixon had similarly deemed the Civil Rights Act applied to only certain minorities? Does one imagine there have been more than a few peeps from Congress?

The most egregious example of Barack Obama ignoring the Constitution is his use of more than a dozen “exemptions” or delays for Obamacare. Indeed, he’s taking a page right out of John Marshall’s book as he tears asunder the document upon which our Republic is based. Just as Marshall purchased the acquiescence of the Democratic-Republicans by giving them exactly what they wanted, Barack Obama is buying Congress’s acceptance of his eviscerating the separation of powers by giving them what everyone wants, including their constituents, and that’s relief from the unworkable disaster that is Obamacare. But instead of accomplishing that task through legal means, Obama is simply obviating parts of the law by executive fiat. And Congress is allowing him to do so.

While Senators and Congressmen may stand by for this because they know their constituents (understandably) demand relief, they will rue the day they gave Obama, and every subsequent president, the power to rewrite legislation to their liking. If Barack Obama can simply decide that legislation is not constitutional, if he can just rewrite parts of laws he doesn’t like, if he can enforce laws whenever he feels like it, the real question isn’t what law he will annul or modify or ignore next, the real question becomes how much longer will the fig leaf of a Congress even be necessary?
Posted by Imperfect America at 7:53 AM