Memento: The story of liberals who can't seem to learn from reality...

If you’ve never seen the movie Memento, I would highly recommend it… The main character, Leonard, is suffering from anterograde amnesia – the inability to create new memories – the result of a violent attack. Unable to create new memories, Leonard uses tattoos and notes to help him find the person he believes is responsible for the last thing he does remember, his wife’s murder. Throughout the movie we see Leonard writing himself notes and getting new tattoos to help him take the next step in his pursuit of the culprit. By the end of the movie Leonard finds and kills “John G” the man he believes is responsible for his wife’s murder. Or at least he thinks he has, and something we discover he’s apparently done before. At the end of the movie the viewer discovers that despite Leonard’s “system” there really is no correlation between his actions and reality. Even those memories he can recall are suspect. In a nutshell, Leonard is lost in a world where reality simply doesn’t exist. Friends and foes are interchangeable and he knows what he knows only because he reads it in his own handwriting. Actions have no consequences because lessons are never learned.

One has to wonder, is to exist in such a world really living? Think about all of the things you know, from when you first learned the fact that a hissing radiator is probably hot to the realization that not everything everyone tells you is true, most of us never stop learning. It’s how we grow, it’s how we discover what works in the world – and what doesn’t – in the pursuit of solving problems, finding pleasure and virtually everything in between. Without learning we don’t grow and are destined to face an endless cycle of reliving the same exact problems day after day.

Such is the world that liberals have created for themselves… and increasingly have imprisoned the rest of us in. They seem to be unable to make new memories. They seem to be stuck in a universe where reality is disconnected from what actually goes on in the world and they believe what they believe only because they read it in their own handwriting… or in this case the typed letters of the New York Times or the spoken word on MSNBC. Reality simply doesn’t intrude on their universe.

From the trope that throwing money is the solution to America’s education mess to the mantra that more government regulation is the solution to all problems, liberals never seem to learn. One can only look at the performance of American schools and know that money and performance do not move in tandem. What liberals don’t learn is what actually works and what doesn’t. The examples are legion. From the fact that tax cuts actually spur economic growth to the folly that massive government spending can spur an economy to the notion that “You can keep your health insurance”, liberals fail to look at what is going on right in front of them. Or maybe fail to look is the wrong characterization… maybe fail to recognize is more accurate. It’s like when you look at one of those optical illusions with the old lady and the young girl. Depending on what you focus on, you see something different. Liberals look at the economic juggernaut of Ronald Reagan and focus on his tax cuts “for the rich” yet somehow fail to see that 15 million private sector jobs were created under his watch and GDP was booming. That’s 15 million families with a paycheck rather than depending on the government for support and hundreds of billions of dollars in American’s pockets. Conversely they laud Barack Obama because of his concern for the poor and minorities while his policies have resulted in record levels of poverty and massive numbers of people simply leaving the workforce because they can’t find jobs, with minorities hit the hardest. 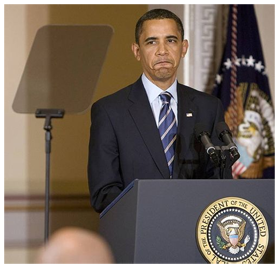 One has to wonder how is it that liberals consistently fail to learn from the stark failures that are in front of them and have been recurring for decades. Whether it’s the collapse of urban America under generations of Democrat rule to the inverse relationship between government regulation and economic growth, one has to wonder if, perhaps there is not some widespread mental problem there. One can certainly choose to support economic policies that put “fairness” above economic growth, but to proffer the notion that higher taxes, increased government spending and more regulation is good for the economic well being of the nation is to simply ignore the history of the last 40 years. To have watched as government regulation of the housing industry brought the meltdown of the economy and then somehow choose to double down on that very regulation suggests that a portion of America’s liberal’s brains have simply atrophied to the point where they simply no longer process the learning of new material. They find themselves stuck reading the same notes they wrote to themselves decades ago such as “fairness”, “more government regulation”, “higher taxes” and of course the ubiquitous target of everything liberal: “the evil capitalists”. Like Leonard in Mememto, who blindly follows his notes and ends up killing an uncounted number of John Gs, liberals in America follow their notes (or teleprompters) and kill jobs, opportunity, prosperity and perhaps eventually the American Dream itself. One can only hope that at some point they misplace the notes and forget where they’ve put them.
Posted by Imperfect America at 6:29 AM