I love Sarah Palin, but I’m beginning to disagree with her on impeachment.

Article II, Section 4 of the Constitution says the following about impeachment: The President, Vice President and all civil Officers of the United States, shall be removed from Office on Impeachment for, and Conviction of, Treason, Bribery, or other high Crimes and Misdemeanors. The House of Representatives has the sole power to impeach and the Senate the sole power to convict.

I’ve thought for some time that Barack Obama should be impeached. The IRS scandal alone was far worse than anything Richard Nixon ever did, or even thought of doing. Unfortunately we don’t thus far have a smoking gun. Benghazi may meet the threshold as well on the basis of “high Crimes and Misdemeanors” in the dereliction of duty as Commander in Chief. Then of course there is the deluge of Obamacare violations. Repeatedly the law says one thing and Obama has done the opposite.

While I have no doubt Barack Obama deserves to be impeached, I’m no longer sure that he should be. It is most certain that the Republicans in the House could gather the votes to impeach.  The point of impeachment however is not impeachment... it's conviction.  Unfortunately however there is no way in hell that it would be possible today to get 67 votes for conviction in Senate. Former Louisiana governor Edwin Edwards once said about his reelection prospects: "The only way I can lose this election is if I'm caught in bed with either a dead girl or a live boy". Barack Obama might paraphrase that in reference to his conviction prospects in the Senate. Although I’m skeptical that even then the Senate would convict… 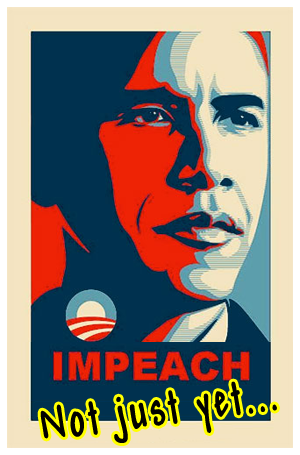 It’s not because I’m afraid he won’t get convicted that I no longer believe he should be impeached however. It’s because I no longer think it’s necessary. Why? Because Barack Obama is a lame duck. Not just lame in the traditional sense of presidents being lame in their second terms. But lame in the sense of being broken. Today his approval rating sits at 39%, the lowest of his presidency. While there seems to be a subset of Americans, about 40% of the population, who seem incapable of recognizing, or refusing to recognize incompetence when they see it, Barack Obama is making it much more difficult for those misguided souls to keep their heads in the sand. His incompetence and perfidy are becoming legion. Obamacare alone would make the case… and consumers will be livid when their subsidies evaporate. Then there’s the administration’s stonewalling in the IRS scandal investigation as more and more information emerges demonstrating its betrayal of our Constitution. Then there’s the chaos in Iraq and reversals in Afghanistan. His bludgeoning of Israel in its battle with Hamas. His impotent response to Vladimir Putin’s aggression and the shooting down of flight MH17. But perhaps most of all, Barack Obama’s betrayal of the American people can be seen in his efforts to “transform” the United States into a third world country by essentially eliminating our southern border while simultaneously inviting every Central American child to swim across the Rio Grande and become a Dreamer.

And that's the reason why Barack Obama should not be impeached. Because while the country and the world are in the grip of chaos and worse, he’s busy… playing golf. He’s attending fundraisers. He’s going on vacation and buying a $4.5 million home in Palm Springs. And Americans can see that. They see his indifferent attitude towards actually solving problems or leading, whether it’s the collapse of the border or the fires burning across the footprint of the Ottoman Empire. Even those predisposed to worship at the altar of Barack Obama can’t help but recognize his disinterest in the duties of actually governing. And that’s the point. To paraphrase Napoleon, When your enemy is in the process of destroying himself, don’t interfere.

Now this calculation could change. If we find an IRS smoking gun with Obama’s prints on it that even hardcore leftists can’t ignore, then impeach him. Absent something like that however there is no reason to rescue Obama from the morass he has brought upon himself. Doing so won’t help the country and will only turn him into a victim and help obscure his reputation for posterity. And that would be the ultimate disaster as future generations would never see the abject failure that was the anti-American presidency of Barack Obama, but instead would read about the heroic legacy of a black man persecuted for his race who was never given a chance.
Posted by Imperfect America at 8:05 AM