Fool or a Villain? Obama and America's Standing in the World...

I find myself vacillating between thinking Barack Obama is utterly incompetent, or he’s an evil genius who has a nefarious anti American plan in mind. While my heart wants to tell me that the person who’s been twice elected President of the United States is a good man with good intentions who’s simply in over his head, my head tells me something else.

When it comes to the domestic economy, Barack Obama is nothing short of a complete disaster. In virtually every situation he has chosen the path that is bad for freedom, bad for entrepreneurs, and bad for businesses… basically bad for pretty much the entire country except for maybe union members and government redistribution recipients. The disaster he has wrought in the economy is obvious to anyone who’s not living off the government.

What’s a little less clear to anyone but the most engaged political observer is the fact that as bad as he’s been on the economy, it’s possible he’s been even worse on foreign policy. In 2008 candidate Obama promised to “Restore America's standing in the world.” Like with the economy, his steps here too seem more like calculated steps in a plan rather than simple missteps. If they were simply missteps one would expect him to get things right 50% of the time. He’s not even close. Indeed, his failed plan to “Restore America’s standing” can be seen in the willingness of enemies and adversaries to attack the US or take provocative actions, all with little concern for consequences from a United States led by Barack Obama.

Our “Reset” partner Russia feels no qualms in threatening NATO allies for policies it dislikes, invaded Ukraine then annexed Crimea and continues to be provocative on and across our borders, all while helping Iran pursue its nuclear ambitions.

Today China has not only hacked into our government computers and stolen personal information on every government employee of the last twenty years, but they are actively building bases on disputed territory in order to expand their area of sovereignty at the expense of its neighbors.

In 2012, thriving on the chaos enabled by Barack Obama’s feckless leadership, Islamists captured and killed four Americans in Benghazi, including Ambassador Christopher Stevens.

Early on in his administration Barack Obama gave a sop to Vladimir Putin and blindsided much of Western Europe when he abandoned plans for the installation of a missile defense system in Poland.

He has decimated the US military, shrinking the Army by almost a quarter, dropping the Navy to a size not seen since Carter, and leaving the United States militarily incapable of fighting two wars at once, a basic element of American defense policy for half a century.

In Egypt Obama embraced the Muslim Brotherhood as it came to power and then proceeded to give the cold shoulder to General Sisi, the leader who ousted the Islamists and who is now Egypt’s president. 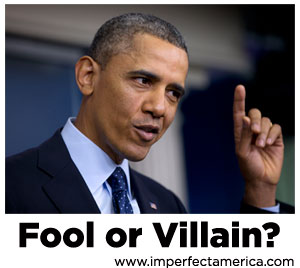 In Iraq, after the United States spent hundreds of billions of dollars and shed the blood of thousands of American soldiers and marines, the country is on the verge of collapse. The virtual collapse of Iraqi state, which led to the rise of ISIS, is a consequence of Barack Obama’s unwillingness to bring about a Status of Forces Agreement that would maintain an American presence capable of reassuring the Iraqis that the hard fought gains would be sustainable. Today ISIS not only controls much of Iraq and Syria, but they have affiliates and adherents who are carrying out terrorist acts around the world, including here in the United States.

In what might be the most disturbing foreign policy error of Obama’s parade of errors, he has worked out a deal with Iran which does virtually nothing to stop the Iranians from getting both nuclear weapons and delivery systems. The Iranians think so little of Barack Obama and the nation he leads that they don’t even bother to make promises that they intend to break as the Soviets used to do. Not only that, Iranian leaders go on domestic television regularly and threaten the United States amid cries of “Death to America” all while knowing that Barack Obama will give them whatever it is they want.

And there’s much more of course, from his support of the leftist thugs in Honduras in 2009, to his embrace of the Communist Castro brothers, to his exchanging five Islamist terrorists for an American deserter, to his paper tiger threats in relation to red lines in Syria… and the list goes on.

One can only wonder, if an American president wanted to do everything possible to diminish the United States on the world stage without explicitly looking like that was what he was doing, what more might he do make things worse than Barack Obama has? Today not only are the two other superpowers in the world far more belligerent than they were when Barack Obama took office, a new terrorist organization is wreaking havoc in the heart of the middle east and a nation that constantly cries “Death to America”, threatens to annihilate Israel and funded many of the weapons that killed American soldiers in Iraq is now billions of dollars richer and on its way to obtaining a nuclear weapon. While it is theoretically possible to have taken more actions that would harm American interests and diminish the United States on the world stage, such as fighting harder to keep the Muslim Brotherhood running Egypt or quitting NATO, it’s hard to imagine any president doing more to intentionally undermine American interests than what Barack Obama has done.

Sadly, at the end of the day I don’t think Barack Obama is just a dolt who makes consistently bad choices. I think he has a plan and he’s executing it… and that plan is to leave in his wake a greatly diminished America that has far less influence in the world than it did when he took office. For those of us who feel like the United States is the greatest force for good in the history of the world – albeit an imperfect one – to know that its enervation came at the hands of the man elected to lead it makes the shrinking that much more tragic.
Posted by Imperfect America at 6:44 AM