Ted Cruz Has a 15:1 Advantage Over Jeb Bush With Conservatives... And Why the Establishment Should Care

It’s sometimes said that you can tell a lot about a person by the friends they keep. That makes sense. Friendships are generally based on complementary personalities, shared values, and a variety of intangibles that cause people to bond.

Money in politics is a similar barometer. The vast majority of Americans never donate any money to politicians or get involved in politics at all. For all of the kvetching about money in politics, there’s really not that much there. In 2012 a total of $6 billion was spent on politics. That includes spending by campaigns, outside groups, and independent organizations. To put that in perspective, Americans spend almost twice that amount on bottled water each year, five times as much at McDonalds and twelve times that on the lottery.

In addition, it’s only a small minority of Americans who donate to political campaigns at all, about 11% on average. Eleven percent sounds low, but that’s actually enormous when compared to the .05% of donors who provide $2.7 billion of that $6 billion by making contributions of $2,600 or more. Talk about “The 1%”! Campaigns seem to be funded largely from “The .05%”. Here’s the breakdown: 89% of Americans give $0 dollars to campaigns, 10.5% give a total of $3.3 billion, while .05% of the population give the other $2.7 billion. That means that a total of about 15,000 people are responsible for almost half the money spent on our elections… out of 315 million people. 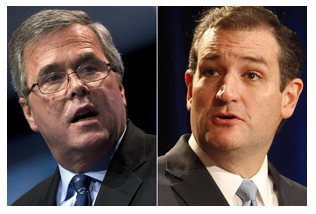 This is not a screed against the rich. Rich people are often successful businessmen and that’s something we could use more of. What we don’t need more of however is crony capitalism. And that’s what makes these reports so compelling. They came out just a week before a report that the Chamber of Commerce, the shill for big corporations, is planning on targeting small government conservatives in the House, many of whom are strong Cruz allies. Their goal is to derail true border control, maintain the Export Import Bank and harness government to shield big businesses from competition whenever possible.

This of course shines an illuminating light on the Bush / Cruz numbers. Cruz is very much a phenomenon of the Tea Party movement. Against crony capitalism, against illegal immigration, against big government, and stridently so, he has animated grassroots conservatives in a way no one has in decades. (Or at least he had until the Trump earthquake came along… even if Trump is not really a conservative.) This is illustrated by the fact that 175,000 people donated to his campaign in its first two weeks. Bush on the other not only supports comprehensive immigration reform (which basically means no wall, no reform plus amnesty to boot) but shows his big government bona fides by seeking to foist the dysfunctional Common Core on the country. Both of those issues are anathema to conservatives and as a result, Bush has attracted very little in the way of grass roots support. He has however gained the support of the K Street mafia, the GOP establishment and their Chamber of Commerce enablers.

Of course there’s a long way to go and there are other candidates in the field, but it’s telling that there is such a stark contrast between what are the left and right wings of the party. While money may make up a big part of politics, success comes from getting people out of their chairs and into the voting booths. The GOP should take notice of the fact that small donor conservatives have broken 15 to 1 for Cruz against Bush. While that might not mean much in terms of money, on November 8th of next year it will be critical. After having been steamrolled by the establishment during the last two elections and seeing the resulting candidates go down in flames, conservatives may just decide to sit 2016 out if the party nominates another milquetoast candidate whose focus is on keeping the Chamber happy rather than working to shrink government and get it out of the big business business. Such as desertion just might be fatal for the GOP as it would likely lead to three consecutive losses, the first time that's happened since FDR.  With two viable parties a third party stands little chance in American politics, however with a feeble party unable to win the big prize, the prospects for one are greatly enhanced.  That's something the GOP establishment just might want to ponder as they seek to hand the nomination to another Bush.
Posted by Imperfect America at 4:04 AM