On Wednesday night Ted Cruz addressed the GOP convention in Cleveland. At first I was a bit disappointed as I was hoping for a masterful dismantling of Hillary Clinton on the biggest stage of the campaign. While he hit her, it seemed almost perfunctory. But upon reflection, he did exactly what he should have done in terms of articulating the principals of freedom, limited government and opportunity. Particularly given the fact that Donald Trump is the GOP candidate and those ideas will likely not find much airtime over the next four months.

Of course none of that really mattered. The only thing that mattered to those on the floor, those in the box seats and those in the media was “Will Ted Cruz endorse Donald Trump?” He didn’t. And as a result much of the GOP establishment, erstwhile conservatives and virtually the entire universe of talk radio hosts have proclaimed his political career over. Maybe it is, maybe it isn’t, we’ll have to wait and see.

But what we won’t have to wait and see is what courage looks like. Ted Cruz went into the lion’s den and came out not only alive, but clearly in possession of his principals. Near the end of the speech, as the boos became so loud and the crowd was (intentionally) stirred into a frenzy, I couldn’t help but picture one of those countless scenes between the two world wars when Winston Churchill stood in the well of Parliament and warned of the coming storm. He was called a war monger. He was called a trouble maker. He was said to be an old fool. And most of that was from people in his own party!

If one has ever seen video of the raucous debates in Parliament, you can imagine what it was like for Churchill to stand there withering the slings and arrows yet continue to speak his piece. So too was it with Ted Cruz. The Trump inspired crowd would very much liked to have tarred and feathered Cruz had they been able to get to him. They did what they could to intimidate the Texas senator, but he continued with his message, suggesting those in the hall and those at home vote their conscience. 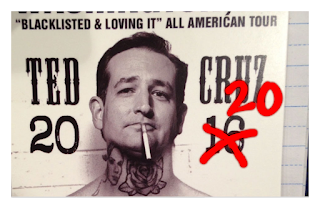 And that is perhaps the single most telling part of this entire farce. Ted Cruz was not telling anyone to vote for him or not to vote for Donald Trump. No, Ted Cruz talked about the party, the constitution, liberty, freedom and he suggested delegates and viewers should vote for the person who they thought would uphold their vision of those things. When someone tells you to vote your conscience and you think they’ve insulted your candidate that tells you much more about you and your candidate than it does about the speaker.

Finally there is the pledge. Ted Cruz did indeed make a pledge to support the nominee. He, along with the rest of the contenders vowed to support the nominee. And he meant it. Do you for one moment think that if Marco Rubio or Bobby Jindal or Ben Carson were the nominee he wouldn’t have supported them? No doubt he would have, with bells on. When he made that pledge, he had every intention of fulfilling it.

But here’s the thing. Pledges are not written in stone or blood. Think about it… How many Americans have been divorced? When you marry you promise to “Love, honor and cherish till death do us part.” That’s a pledge… yet somehow almost half of marriages end up in divorce. Does that mean the bride and groom were lying? Absolutely not. They meant it, but things don’t always work out as planned. A pledge is not a golden ticket for the other person to do whatever they want. That pledge does not give a husband carte blanche to sleep with half the women in his office and it doesn’t give the wife the right to abuse the children. The pledge that people make to one another at their wedding assumes a relationship within the normal bounds of acceptable behavior… it’s not an iron clad contract for life that remains in effect regardless of what the other person does.

And so too is it with Ted Cruz and his pledge to support the nominee. Cruz had every intention of supporting the GOP’s nominee when he made it. But then Donald Trump personally attacked both Cruz’s wife and father. Yet Cruz was somehow still supposed to pledge his support. If that’s the case, then one wonders what exactly Trump could have done that would have been sufficient to persuade his supporters that breaking the pledge was warranted? “Stand in the middle of 5th Avenue and shoot people”? What if he had been indicted for fraud associated with Trump University but hadn’t yet been tried? What if it became known that Trump was having an affair? What if he had announced that he was once again pro abortion or wanted to restrict the 2nd Amendment? None of those things happened of course, but which of them, if any might have been a sufficient rupture to allow someone to break their pledge.

For some Americans there are lines in the sand that should not be crossed. Others may have no lines or their lines are fungible. Ted Cruz does have a line and Trump crossed it when he targeted Heidi and Rafael. The fact that Trump has navigated his way through the dysfunctional primary system and come out on top does not make up for the means he pursued to arrive there. Actions, as they say, have consequences, and Donald Trump very much took the low road and lost the endorsement of Ted Cruz as a result. Despite that, Ted Cruz more than fulfilled his promise by taking the stage in Cleveland and talking about Republican values, freedom and the Constitution, then suggesting that voters look to their consciences to vote for the person most likely to defend them. He even explicitly stated that Hillary Clinton would not. That he didn’t kneel and kiss Trump’s ring, and the fact that his refusal has so incised Trump’s team tells you everything you need to know about Donald Trump and his supporters. It is not winning that animates them, it’s obedience. At the end of the day, Donald Trump wants rule the nation and Ted Cruz wants to lead it. The GOP voters have made their choice, now we’ll see how that choice plays itself out on the national stage.
Posted by Imperfect America at 12:13 PM