America's Game of Russian Roulette: Clinton vs. Trump or Revolution vs. War

I remember in 2008 I told my wife that that presidential election was the most important in a generation. I told her in 2012 that that election was the most important in my lifetime. Both of those statements were completely true. In putting Barack Obama in the White House, for the first time Americans elected a race bating closet Muslim socialist / fascist as the leader of the free world. That is of course unfortunate in many ways for many people around the world. Not only has the American economy been stuck in the worst recession in 65 years, race relations are the worst they’ve been in 50 years, our borders are practically nonexistent, freedom and the Constitution are under constant attack and the image of the United States as a leader on the world stages is in tatters.

Now it’s possible that the election of 2016 is even more important, but sadly there is no relative superhero like John McCain or Mittens Romney on the ticket. I was against both of those squishy centrist candidates from the start and would have much preferred to have an actual conservative on the ticket… but alas it was not to happen.

It was with great expectations that I looked forward to the 2016 campaign as finally an opportunity for a true conservative to emerge from the mosh pit and lead the nation to a victory over the cancer of today’s Democrat party. Unfortunately however that did not happen. Between the GOP establishment’s incompetence and fear of a real conservative, as well as the media’s love of ratings – and that includes the so called “conservative” media – today we have Donald Trump as the standard bearer for the party of Ronald Reagan.

And so it is that Americans, with a population of over 320 million people have put themselves in a situation where the only two people with a realistic chance of becoming the leader of the free world are a lying big government socialist and an uninformed narcissistic thin skinned crony capitalist with no love for freedom. This is essentially the opposite of winning the lottery. Americans have somehow managed to put themselves in a game of Russian Roulette where all of the chambers have rounds in them!

While the elections of 2008 and 2012 set the nation on the road to ruin in terms of economic stagnation, stultifying regulation, the undermining of the Constitution and eviscerating America’s position as leader of the free world, the election of 2016 will have even more devastating effects.

The election of Hillary Clinton will result in the continuation of the policies of Barack Obama, only on steroids. We will get a Supreme Court that will look to the UN charter rather than the US Constitution. We will get continued and increasing regulation which suffocates prosperity and entrepreneurship but which helps big business. We will get increases in taxes, skyrocketing government spending and more race bating. And perhaps most of all, we will surrender our borders and will transform our nation into a refuge from which immigrants can escape the third world only to then work to turn our country into a mirror reflection of said third world. 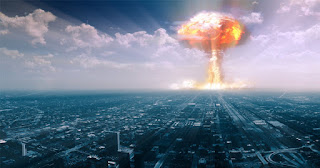 The election of Donald Trump will give us a crapshoot of broken promises, protectionism, and isolation. At the same time the 1st Amendment may go by way of the dodo bird while regulation will likely grow for the benefit of big businesses and at the expense of entrepreneurs. More ominously, a Donald Trump presidency will create great divisions between the United States and our NATO allies and others who have helped maintain a relative peace for much of the last half century. As the increasingly bellicose Chinese and Russians seek to expand their spheres of influence, the world will watch a President Trump seek to pull back the American footprint. Osama Bin Laden once said “When people see a strong horse and a weak horse, by nature, they will like the strong horse”. In this case the strong horses will be China and Russia, and that does not bode well for freedom or peace for anyone.

So at the end of the day, Americans have a choice to make, and neither is a good one.

The first option will put Hillary Clinton in the White House, and that will lead to a fracturing of the nation, along lines of race, along lines of income, along geographic lines and fundamentally about an understanding of the Constitution and freedom. And that fracturing could very well lead to revolution. And not a theoretical revolution played out in newsrooms and college campuses and on the editorial pages of the New York Times and the Wall Street Journal. No, this may indeed turn out to be a real revolution where people revolt against the tyranny of an economically and culturally oppressive government and a dearth of opportunity of any kind. It won’t show itself by a fife and drum corps marching down Main Street. No, it will be in the shadows as more police are targeted, more citizens take matters into their own hands and order starts to come apart while an increasingly militarized police force seeks to keep things in check. This revolution will look a lot more like the one that started in France in 1789 than the one that started in the colonies in 1776.

The second option will put Donald Trump in the White House and that will lead to a calcifying of the American economy, estrangement between the US and erstwhile allies, and at some point, war. And this war will not be a guerilla war fought against jihadis seeking to bring about the caliphate. No, this war will be against Russia or China. As Trump and his little hands pull back from the world stage, the Russians and Chinese will seek to expand their empires, taking Ukraine and Taiwan respectively. In both cases Trump will likely acquiesce, which will only lead to further expansion such as with the Baltics in the case of Russia and any one of half a dozen other countries or islands in the case of China. At some point the threat will become sufficiently ominous and American allies so vocal that the United States will have to engage. And unlike Korea or Vietnam or Afghanistan in the 1980s, this will not be a proxy war limited to some theater most Americans couldn’t find on a map if their lives depended on it. No, this will be a real, hot war with sophisticated enemies throwing billions of dollars of weapons at one another. One can only hope that such a conflict stays conventional…

So as we stumble towards the 2016 election Americans should be aware… they have left themselves with not only no good options, but only terrible options, both of which will likely lead to much bloodshed, chaos and possibly the end of the Republic. Good job Rush, Matt Drudge and the GOP establishment. When your country needed you, you decided to whore yourselves out to a populist megalomaniac. The citizens of dystopia in America’s future will no doubt be quite grateful to you.
Posted by Imperfect America at 6:28 AM