Colin Kaepernick is certainly an articulate young man. That was obvious from his interaction with the press in the locker room where he faced a phalanx of reporters asking him about his decision to sit through the national anthem to bring attention to the "oppression" of black men. Given that this is the first year he has sat through the national anthem he was asked how his position has evolved over the years. He answered:

When asked if he personally felt oppressed he responded:


There have been situations where I feel like I've been ill-treated, yes. This stand wasn't for me. This stand wasn't because I feel like I'm being put down in any kind of way. This is because I'm seeing things happen to people that don't have a voice, people that don't have a platform to talk and have their voices heard, and effect change. So I'm in the position where I can do that and I'm going to do that for people that can't.

When asked if he’d been asked by management to tone down his comments he replied:


No. No one’s tried to quiet me and, to be honest, it’s not something I’m going to be quiet about. I’m going to speak the truth when I’m asked about it. This isn’t for look. This isn’t for publicity or anything like that. This is for people that don’t have the voice. And this is for people that are being oppressed and need to have equal opportunities to be successful. To provide for families and not live in poor circumstances.
(Emphasis mine.)

And when asked what needed to change he answered:


There's a lot of things that need to change. One specifically? Police brutality. There's people being murdered unjustly and not being held accountable. People are being given paid leave for killing people. That's not right. That's not right by anyone's standards.  (Emphasis mine.)  Full transcript here. 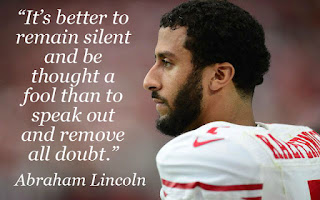 Kaepernick may indeed be articulate, but alas, he’s a fool. Abraham Lincoln had it right: "Better to remain silent and be thought a fool than to speak out and remove all doubt.” What makes Kaepernick a fool? The fact that he parrots the Black Lives Matter lies that black men in America are oppressed and are unable to provide for their families and escape poverty because of police brutality.

Black men may indeed be oppressed by the government, but it’s not in the way Kaepernick suggests. It’s by government welfare programs that destroy families and make unwed motherhood a viable choice. It’s by the education bureaucracy that walks in lockstep with teacher’s unions and keeps inner city children from getting a decent education. It’s the myriad labor regulations that make it inefficient for businesses to hire young black men with little experience and give them an entry into the working world. And the consequence of all of these government programs is that young black men do indeed have a difficult time escaping poverty and all too often are ending up dead… but it’s mostly not at the hands of police, but rather at the hands of other young black men.

But that’s not what Kaepernick is protesting. That’s not what Kaepernick wants to change. That’s not what Kaepernick is lending his voice to the voiceless for. No, Kaepernick would rather focus on the tiny fraction of police interactions that result in the bloodshed of innocent black men. Why? Because singling out police is an easy answer to a complex problem. Like so many men of the left, Kaepernick isn’t interested in actually solving problems, he’s interested in making himself feel good about talking about them. To the left results don’t matter, outcomes don’t matter. What actually works doesn’t really matter. If it did, Kaepernick and his BLM friends would be protesting for more police in their communities, they would be protesting to throw out the teacher’s unions, they would be protesting minimum wage hikes that make it economically impossible to hire and train uneducated young men with no work experience. They would be calling for longer sentences for criminals, everyone from murders to kids involved in flash mob violence. They would be focusing on character programs and strengthening families rather than protesting police and shutting down highways.

Black men do indeed have challenges in America, but the truth is, like everyone else, they have opportunities as well. No place in human history have black men or yellow men or white men or any other men had the opportunity for success they do in the United States, regardless of their background, station, race or religion.  Colin Kaepernick has been able to take advantage of those opportunities like few others have, black or white. By foolishly choosing this position he betrays all of those young black men who understand that with good character, hard work and perseverance anyone has an opportunity to succeed in America. If black America is to be saved, it will be those men who do it, not the fools like Kaepernick and his BLM friends who would rather perpetuate a mentality of victimhood and oppression.
Posted by Imperfect America at 6:13 AM