Thoughts on Trump - When Life Gives You Lemons...

While I’ve come to despise Donald Trump, I hope he wins in November…

Donald Trump is a lying, manipulating, protectionist big government Democrat. I’ll still be voting for him, however, because Hillary Clinton is all of that and more. She will keep the welcome mat open for illegal immigrants from all sorts of 3rd world countries in order to create more Democrat voters. Donald Trump at least claims that he will build a wall along the southern border and tighten immigration from places rampant with Islamic terror.

The other critical issue is the Supreme Court. Donald Trump released a list of potential Supreme Court nominees that has pleased many conservatives. He has stated on numerous occasions that he plans on nominating conservatives to the Supreme Court. He may not, but we know for a fact that Hillary Clinton will nominate nothing but hardcore leftists in the vein of Justice Ginsberg and Justice Sotomayor.

Together immigration and the Supreme Court are the two biggest issues on the ballot in November. Between working to turn the US into a lefty paradise of a failed 3rd world country and eviscerating the freedoms contained in the Bill of Rights, I’m not sure the country can survive another four years of the statist Obama agenda. On both issues Donald Trump claims he will do the right thing while Hillary Clinton will do the exact opposite. As a known liar we may indeed be disappointed by Trump, but at least there is a chance he will keep his word and do the right thing. With Clinton there is zero chance. 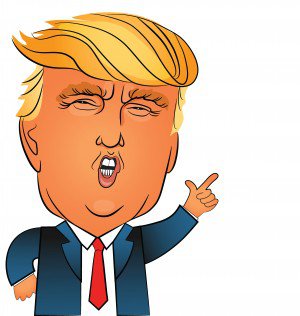 Of course, one has to wonder if Donald Trump really wants to be President. He’s been running for the job for a year – and on and off numerous times before that – but he doesn’t seem to be interested in winning. Since he secured the nomination almost three months ago, and since the convention one month ago, Trump has focused almost all of his attention on his GOP critics and the media, rather than Hillary Clinton. Hillary Clinton is possibly the worst candidate the Democrats have ever nominated. Apart from her demonstrated incompetence, her treachery over Benghazi, her lies about her email server, her slush fund known as the Clinton Foundation and the fact that voters seem to barely be able to tolerate her, she’s a superstar. But somehow Donald Trump has figured out how to trail someone who would probably lose to “None of the Above” if that was the only other choice. Although his trip to Louisiana and his recent mea culpa were steps in the right direction, it remains to be seen if those are the beginning of a focused campaign to win or merely a feint in a long term plan to lose.

And of course it’s comical that I get emails every day from the Trump campaign seeking money. I will never send Donald Trump a single dollar. Why? Because he’s the one who brags that he’s worth $10 billion and that he’d be the only guy in the race funding his own campaign. It’s not that I wouldn’t want to help keep Clinton out of the White House, I do, but there’s no chance I would send the Trump Campaign money that they would simply use to attack Ted Cruz or the media or some other pointless ego salving debacle rather than focus on Clinton. The truth is, if I had $10 billion in the bank, I’d be more than happy to spend at least $9 billion of it winning the presidency, because while making lots money is no doubt fun – I imagine – saving the greatest nation in history is truly something exceptional.

Donald Trumps’s basic problem isn’t that he can’t attract moderates… his problem is that much of the conservative base – this writer included – pretty much hate him. While I’ll be voting for him, lots of others, particularly those in the Never Trump camp won’t be. If he can’t get his base out, he loses going away. There are simply not that many union members disaffected enough with the Democrats to make up for tepid support from the base.

My suggestion to Trump, if he wants to reengage conservatives, would be to release a list of his intended cabinet nominees, at least for those appointments conservatives care about. For Secretary of State, John Bolton, for Secretary of Defense, the slightly damaged David Petraeus, Rudy Guiliani for Attorney General… maybe. There are others too, such as perhaps Michelle Rhee for Education Secretary and others focused on streamlining government for positions in the EPA, the Department of Energy and the IRS. The ranks of the American Enterprise Institute, the Mises Institute and the American Center for Law and Justice would be great places to start.

Of course this might not be enough and those people might not accept anyway… but the reality is, Donald Trump has to get conservatives and the Never Trump people to hold their noses and pull the lever for him, otherwise it’s President Clinton all over again. And that really is the point. I’ve pretty much come to despise Donald Trump, half for everything he’s done and half for the stupidity of the GOP establishment for foisting him on us, but as much as I despise him, I love my country more, and while I’m leery of what he might do, I’m downright frightened that the country can’t survive what I know Hillary Clinton will do.

And finally, there is impeachment.  If Clinton were to get in, there is less than zero chance she would be impeached and convicted, regardless of what she might do.  She could literally set fire to the Constitution and she'd have no problem.  Trump however is a different story.  If gets into office and he steps out of line, or the Trump University comes back with a loss, there is a real possibility of impeachment and conviction as both Democrats and many Republicans would be happy to vote for both...

When life gives you lemons, you make lemonade.  Donald Trump is lemonade.  Hillary Clinton is lemonade laced with strychnine... I'll take the regular lemonade, please.
Posted by Imperfect America at 4:09 AM