Freedom Will Not Go Quietly Into That Good Night

Adolph Hitler said: “If you tell a big enough lie and tell it frequently enough, it will be believed.” That line may never have been as true as it is today. What is that lie? It comes in many flavors: America is racist. Donald Trump is racist. Trump supporters are racists. Republicans are racists. You might notice a theme here. Now repeat the above and exchange the word racist for fascist...

None of those things are true. But truth doesn’t matter. Why? Because truth is not the objective, power is. In 2020 America, if you disagree with the left on anything from abortion to immigration to tax cuts to global warming you are an enemy who must be destroyed. And the primary weapons of choice are the slurs of racist and fascist.

And the beauty of it is that no proof beyond the assertion is necessary. Before he became president Donald Trump lived most of his life in front of cameras in the most media obsessed city on the planet. Morning shows, talk shows, radio shows, news shows, press conferences, grand openings, the Apprentice… you name it and Trump was there. As we all know, Donald Trump basically can’t keep his mouth shut, yet for the first 67 years of his life this man who never met a camera or microphone he could resist somehow kept the secret of his virulent racism a secret.

Then, once he became president he did such racist things as fund Historically Black Colleges and Universities (HBCUs) at a level no president ever had, label the KKK as a terrorist organization, signed into law sentencing reform that had been called for by black leaders for decades, pardon the late boxer Jack Johnson and the very much alive Alice Johnson. He also supported “opportunity zones”, pushed for school choice, both of which disproportionately benefit minorities, and at the same time created an economy that brought about the lowest black and Hispanic unemployment rates ever recorded. But he’s a racist.

To understand how accurate Hitler’s words are look no farther than a Newsweek piece from July: Half of Americans Think Trump Is Racist and an Additional 13 Percent Are Unsure.  That is simply staggering, and the reason is simple: In excess of 90% of the media coverage of Donald Trump is negative. “If you tell a big enough lie and tell it frequently enough, it will be believed.” Add to that the manipulation by Facebook, Google and Twitter and you get us to where we are today with an election that was not only stolen, but with 1/2 the population thinking that a flawed but good man is racist and a fascist...

The above is only a symptom of the real problem however. The real target is not Donald Trump per se, but rather the half the population who support him, and the truth is they hated us long before Donald Trump came onto the political stage, most clearly seen when we were called racists and Nazis for opposing Barack Obama in 2008. 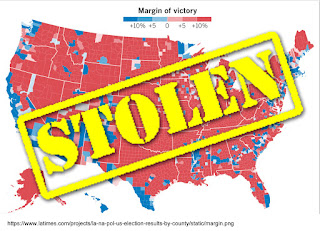 Democrats and their comrades get away with it because they know we respect the rule of law. In 2008 when we lost to Barack Obama we didn’t riot.  We peacefully protested and went to the voting booth. In 2010 we went to the polls and the Democrats lost 64 seats in the House and we finally turned the Senate red in 2014. That is what conservatives and Republicans generally do. We don’t riot when we don’t get our way. Even when we’re cheated, as happened in 1960 with Nixon, 2004 with Dino Rossi and 2008 with Norm Coleman, we don’t try to burn the country down because we respect the rule of law.

But the question is, what if there is no real law to respect?  What if there is one law for the suckers who play by the rules and basically a lack thereof for Democrats? For decades Democrats have fought attempts to secure out our voting process by continuously opposing voter ID, supporting same day voter registration and encouraging mail in balloting among other things. Any attempts to ensure credibility of the system were labeled “racist” or called “voter suppression” and usually withered on the vine. When they won in 2008 they proceeded to weaponize the federal government against the citizens. In the ultimate demonstration of such tactics, the Obama administration used the IRS to silence opponents, spied on media who dared question their actions and turned the FBI and the courts into a vehicles for the launching of a coup d'état against their successors. And now that they think they're poised to take complete power again, they’ve threatened to pack the Supreme Court, grow the Senate, eliminate the Electoral College and keep “lists” of their opponents. There's a word for that and it's not liberty.

What do 75 million Americans do if they discover that despite playing by the rules they’ve been duped again, this time on the single most important election of their lifetimes, with the future of the Republic literally hanging in the balance? They are told by the same media who spent four years pushing the fiction of Russian collusion that they should simply shut up and accept defeat, regardless of the myriad examples of voter fraud, both big and small.

Lincoln said “A house divided against itself, cannot stand.” He was referring to the issue of slavery, but the line might also well apply here today. When fully half the American population loses confidence in the integrity of the election process upon which the nation is governed, loses confidence in the media - both traditional and social - who have been lying to them for years about fictional election tampering, and come to believe that their political opponents will use everything from rioting to mayhem to outright theft to gain control of the government, what should they do? What is their motivation to continue to participate in a process where the game is rigged?  What is their motivation to continue to engage in a system where one side believes the Constitution is but a barrier to be subverted rather than the rulebook by which the nation is governed? What is their motivation to be constrained by a Constitution which their opponents disregard at every turn as they seek to undermine the very rights it was written to protect? What is their motivation to engage in a process legally when they know that their opponents seek to bastardize that very process to accumulate more power and eviscerate the very ideas upon which the nation was founded?

I don’t have the answer and I’ve no idea where we are on a spectrum of anarchy vs. tyranny, but I’m certain that the closer Democrats push the United States towards tyranny the closer we get to a point where liberty loving Americans look for other means to protect the God given rights the Constitution was written to guarantee.  What that looks like, I’ve no idea, but Carl von Clausewitz once said “War is the continuation of politics by other means.” That’s something to keep in mind as the Democrats continue their march to eviscerate our Constitution and destroy the country that has given so much to so many for so long.  I don't believe that freedom will go quietly into that good night...

Posted by Imperfect America at 5:13 AM