For example, I was in the Army and stationed in West Germany when the Berlin Wall came down in November of 1989. It was of course news where we were, but I don’t think many of us in Rheinberg really understood that the epochal event of our generation was playing itself out only a few hundred miles away. We look back at it today as the touchstone that it is… the beginning of death knell and collapse of the Soviet Union. But at the time most of us didn’t recognize it as such.

That’s likely because for all of my life, and most of my parents’ lives the Soviet Union was the grand villain, the ubiquitous enemy, a fount of evil that simply was. It was the perpetual enemy to be feared above all else and it was the reason I and hundreds of thousands of others spent weeks, months or years training to counter attacks coming from Poland or East Germany or the Soviet Union itself.

In an environment where the Soviets being enemies was as natural as gravity, it was hard to see the fall of the Wall changing the world. But it did. September 11 was something different altogether. Most of the country was going about its normal business that morning, another mundane Tuesday that didn’t look to be particularly different from any other… Then the first plane hit. It was a stunning event, but for a moment we thought that it was a tragedy of an accident. The kind of bad thing that sometimes happens. The moment the second plane hit everyone in America knew something was going on, we were being attacked and that in one form or another, we were at war with someone.

In short order Americans found out that this was a new, non traditional enemy that would use brutal tactics to achieve its goal of our destruction. When those two buildings, those two signs of American strength and prosperity came down, we knew the world had changed. 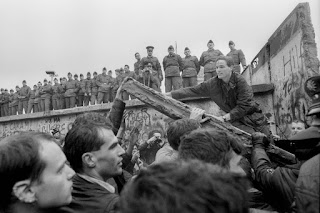 And now we sit here two decades later and we are at a point in history no less important than the fall of the Berlin Wall or the attack on the Twin Towers. When the Soviets or the Islamic terrorists were the enemy we understood exactly what was at stake: our nation and our culture. Today, both of those things are in peril, but in a far more pernicious way.

The danger today strikes at the very foundation of our Republic, and indeed the Republic itself.

Most Americans don’t quite recognize that the exercise of the various God given rights we enjoy is not protected by the 231 year old document displayed in the National Archives, but rather by the fact that most Americans choose to respect the government and institutions that have been built on that document’s words. While the police and other government officials play a role in dealing with outliers, for the most part Americans pay their taxes, obey the law and avoid confrontations with their neighbors voluntarily. They understand they are part of neighborhoods, communities and a country based on laws that find their foundation (mostly) in the Constitution and values that find their inspiration in the Declaration of Independence.

Americans follow the rules not because of stormtroopers stationed on every corner enforcing diktats from above, but because the Constitution gives them a say in their government and their leaders. As such, even though Americans generally have a negative perception of Congress (18% approval rating) they remain engaged because every two years they have an opportunity to “throw the bums out!” And while they almost never actually do that, Americans feel like they have a say.

When citizens no longer feel like they have a say in their government, when they feel like their government has been stolen right out from in front of them, they no longer feel an obligation to live their lives by the framework laid out in the Constitution. There have always been Americans who have felt wronged or disenfranchised or powerless and decide to act in ways that are… anti social, but they’ve largely been extreme outliers. What happens when fully half of the population feels like they have been disenfranchised and were forced to watch the theft play out right in front of them while politicians told them “Nothing to see here”?

The Revolutionary War occurred when the British sought to quash the economic and political freedoms the colonies had established over the previous century and a half. Despite attempts by the likes of Benjamin Franklin and John Adams to bridge the gap before it became a schism, the colonials had finally had enough and the Declaration of Independence became the foundation for a new nation. It was an uphill battle from the start with much of the population uncertain about which side to support. But eventually freedom won the day and eventually our Constitution birthed our Republic.

One wonders, after spending decades watching Democrats setting the table for this fraud (opposing voter ID laws, pushing for same day registration, expanding voting periods and encouraging mail in balloting) how Republicans and other freedom loving Americans will react to this theft? It’s one thing to lose an election that appears largely aboveboard, even when you vehemently dislike the other guy… but it’s another to have the election stolen from you when your eyes, common sense and reams of data suggest your guy won. If we were talking about dog catcher or a state senator this would probably not matter. But we’re talking about the head of the most powerful government in the world, whose reach extends from your kitchen table to the moon, literally. Make no mistake, beyond the typical election issues such as taxes and job creation and confrontation with or supplication to China, the real issue that is at stake is our Republic: Court packing, new states and the spectrum of federal power to coerce states and local governments. And of course vote fraud.

Americans have always taken comfort in the face of election losses because our Constitution gives them the opportunity to do a better job of making their argument, getting out the vote or selecting a better candidate next time. There was always hope. But not this time. If Democrats are allowed to steal this election in plain sight, then all is lost, including hope. No hope for honest elections. No hope for redemption. No hope for freedom. George Orwell said “Who controls the past controls the future. Who controls the present controls the past.” If Democrats are allowed to steal this election then America’s past becomes a fiction of hate, America’s present becomes a reality of lies, deceit and coercion and America’s future becomes one of oppression and subjugation. That is exactly what our Constitution was written to be a bulwark against which is why Democrats have sought to undermine it for decades. Such are the things revolutions are made of, and this time we're watching history being made - and we all know it.
Posted by Imperfect America at 5:58 AM