That is exactly where we stand. The GOP was formed in 1854 in reaction to the passage of the Kansas Nebraska Act which essentially opened up the West to the expansion of slavery. Many Northerners understood that mostly poor free men and could not compete with giant Southern landowners who employed slave labor. The Kansas Nebraska Act heralded the end of the delicate balance between slave and free states that had largely been in place since the ratification of the Constitution in 1788. Slave states already having disproportionate congressional power, the Kansas Nebraska Act would provide the foundation them to gain significantly more economic power to grow as well.

Drawing its membership from the remains of the Whig Party and the anti-slavery wing of the Democratic Party, the GOP’s first candidate for President, California’s John C. Frémont lost. Their second candidate however did somewhat better: Abraham Lincoln.

Fast forward and the party ended slavery (and passed the civil and voting rights acts a century later) has become a party of modern slavery in the form of big government. Although the Democrats have traditionally been the party of big government, today they share that label with a vapid GOP.

2012 is the best opportunity Americans have had in 30 years to attempt to throw off the yoke of government tyranny. In the wake of the 2010 elections when the GOP not only won an historic victory in the House, but in the Senate such small government candidates as Rand Paul, Marco Rubio and Mike Lee prevailed, one would think that the party understood where the future of success with the American people lay. Unfortunately however that does not seem to be the case.

On a national scale the Republican Party cannot seem to understand its place in this historic moment in time. In 2012 the slavery that Americans face at the hands of the federal government is clear:

Not the kind of slavery that was the catalyst for the formation of the GOP, but slavery nonetheless. And the party has been complicit in much of what brought us to this point.

In 1980, when Americans saw all too clearly the consequences of an unabashedly progressive agenda, the GOP responded (despite the wishes of party insiders) with Ronald Reagan, a man who was not afraid to clearly articulate that government was the problem and that it must be restrained and cut – remember he promised to shutter the Education and Energy departments, only to be stymied by a Democrat controlled Congress. 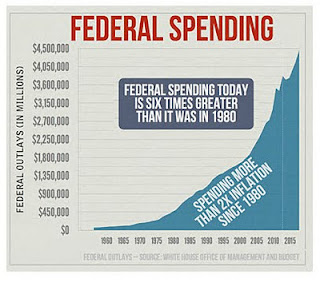 Today, 30 years later, when federal spending has increased by 500%, when government regulation is exponentially more intrusive, when half of the population is relieved of paying for the operations of government, the GOP field is populated by big government advocates or those who want to simply trim around the edges and rearrange deckchairs on the Titanic.

A GOP victory in 2012 with a lukewarm conservative who is happy to simply slow the rate of increase in government spending and to tentatively trim government regulations will be a defeat for the American people. The country will become Greece or Italy… only more slowly. A better outcome for the country might be another four years of Barack Obama. At least by 2016, assuming the country hasn’t collapsed by then, a party might emerge that will finally present the American people with a real choice between slavery and freedom.
Posted by Imperfect America at 5:28 AM