Rick Perry should harness an imploding Europe to define his message to GOP voters.

It is said that history is written by the victors. In the case of the 2012 election it’s hard to see how that’s even possible given that with the current trajectory of the GOP primaries we’re all going to end up losers.

Rarely does it occur that choices and consequences of government policies are so starkly presented for an electorate as they are today. Unfortunately, I’m not talking about the GOP field as an alternative to our big government president. 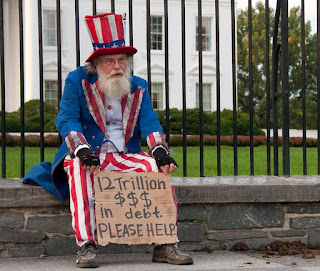 Today, the national debt stands at approximately $15 trillion, or almost $50,000 per American citizen. $4.6 trillion of that debt was run up under Barack Obama. That exceeds the combined amount of debt accumulated by every president from George Washington through the first George Bush. Everyone knows that too much debt is a bad thing. Even Candidate Barack Obama knew enough and told us on the campaign trail:

The problem is, that the way Bush has done it over the last eight years is to take out a credit card from the Bank of China in the name of our children, driving up our national debt from $5 trillion for the first 42 presidents, # 43 added $4 trillion by his lonesome so that now we have over $9 trillion of debt that we are going to have to pay back, $30,000 for every man woman and child. That’s irresponsible. It’s unpatriotic.

So what George Bush accomplished in eight years, Barack Obama has accomplished in three. And it's only going to get worse. By Candidate Obama’s rationale that must make President Obama über unpatriotic.

Well, the President will tell you that the policies behind that spending were necessary to save the country from a depression and are finally beginning to bear fruit. He’d point to December’s unemployment rate that dropped to 8.5%, from a peak of 10.1% in November of ’09. As the fourth best president in our history, he’s obviously doing something right.

Or maybe not… When Barack Obama took office the population of the United States was 306 million and there were 186 million people working with an additional 14.9 million people looking for work, resulting in an unemployment rate of 7.4%. (14.9 million / 201 million) That 201 million is called the Workforce and it’s the key to understanding unemployment numbers. Workforce is defined as the following:

Total number of a country's population employed in the armed forces and civilian jobs, plus those unemployed people who are actually seeking paying work.

Today, three years after Barack Obama took office the population has grown to 312 million but the workforce has actually shrunk from 201 million to 199 million. That means that despite adding 6 million people, the number of Americans working or actively seeking work has dropped by 2 million. Add to that the 4 million working age new Americans and you have a total of 6 million more people not working or even looking since Barack Obama took office. That’s how you get to 8.5% unemployment; you get people to stop looking for a job in the first place. He’s definitely doing something, but it’s not good. Nor is it unprecedented. 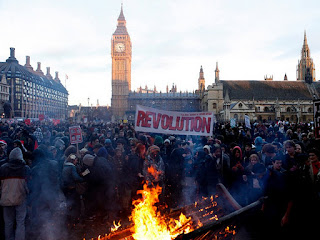 The big government policies that Barack Obama is shoving down American’s throats are this very day showing themselves to be utterly unsustainable a mere 5,000 miles away. Within the last week S&P downgraded the debt of nine (9) European countries, including EU giants France, Italy and Spain. The Euro is on the brink and the economies are disasters. If that were not bad enough, unemployment in Europe is so high (10% overall and 9% in France, 14% in Ireland, 18% in Greece and a whopping 23% in Spain) that a continent already unable to replace itself is shrinking even faster as an increasing number of its citizens emigrate to seek jobs elsewhere. In Greece the economic problems are so bad that parents are now abandoning babies and children at hospitals and churches across the country.

Which brings us back to the American election of 2012. The big government policies of Barack Obama are bringing the train wreck that is Europe to our shores. Unfortunately, the candidates leading the GOP charge to unseat him are little better, despite their protestations to the contrary. They claim to be conservatives, but they are not. They are big government advocates, just less so than Barack Obama.

Even more unfortunate is the fact that the only candidate in the GOP field who actually has a record of pursuing small government policies is seemingly unable to articulate those ideas to the average voter. If that candidate, Rick Perry, is to have any chance at all to resurrect his campaign he will have to do something dramatically different and he’ll have to do it soon. He should drop the oafish Bain Capital attacks and instead focus in a laser like fashion on smaller government. That is the one issue that every American can relate to regardless of age, sex, race etc. The rapacious nature of government must be demonstrated in a way they understand. In South Carolina, where the NLRB just tried to kill a Boeing plant, that message should resonate particularly well.

And how should he do that? With PowerPoint of course. PowerPoint might be a stretch, but not by much. The image of a burning Europe with its big government economies in ruin, double digit unemployment, rioters in the streets and babies abandoned on the sidewalks makes a perfect foil for the big government policies of both Barack Obama and the rest of the GOP field. Those are the kinds of images that voters can relate to because they see more and more of them on our own shores. And of course PowerPoint would come in handy when trying to remember what agencies to cut…

It would be a shame if when the history of the 2012 election is written Rick Perry is reduced to a 53 second footnote. Particularly because that means that some big government advocate won. Despite how damaging that sub one minute episode was, it need not be fatal to his campaign, but the time is getting short. With only 2% of the delegates decided, Rick Perry still has an opportunity to resurrect his campaign and maybe change history. His only hope is to harness the power of what Americans clearly don’t want, which is on such brilliant display right across the pond. With the images of Athens on fire, London under siege of by rioters and Naples covered in trash, even the least engaged voter can understand the correlation between big government and economic ruin and social failure. It’s up to Rick Perry to figure out how to make that case. If he does he has a shot at winning. If he can’t he’s destined to be a footnote in American political history.
Posted by Imperfect America at 9:02 AM