I remember hearing once that in Shakespeare’s day the cumulative writings an educated person could be expected to encounter over the course of their lifetime was the equivalent one week’s worth of the New York Times. Today things are slightly different in that we get a week’s worth of the New York Times every week – whether we want it or not. In addition, thousands of times that volume of content is every day via print, broadcast and internet media. As such, anyone who doesn’t want to be overwhelmed to the point of becoming catatonic has to focus their attention on sources of news and information they perceive to be reliable, honest and accurate.

Modern voters find themselves in a similar situation. The possible issues about which one might be concerned are literally infinite. From the national unemployment rate, to state referendums to local zoning ordinances, a voter can be overwhelmed with trying to get even a cursory understanding of the issues. Add to those issues dozens of candidates with varying positions and you have a recipe for catatonia. All of this while voters are busy living their lives, raising their kids, spending time with friends etc.

Voters typically deal with this surfeit of choices by narrowing the focus, in a similar way to what they do with information sources, i.e. look to sources they think they can trust. When they see a candidate pilloried on 60 Minutes for wanting to rationalize (aka “slash”) Social Security or when the New York Times runs a piece about how brilliant a particular presidential candidate is, fans of those sources know how to vote. Another way citizens decide who they are going to vote for is by joining particular organizations that seem to be made up of people who share many of their beliefs or values such as various Tea Parties or community organizations. 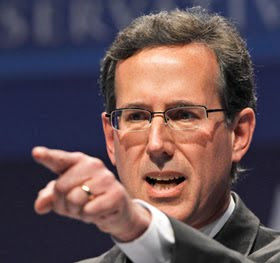 A similar scenario is playing itself out in the GOP primary and the beneficiary of such absurdity is Rick Santorum. Rick Santorum surged in Iowa and almost beat the regrettably frontrunning Mitt Romney. How did he do it? A big part of it was that he was essentially the last man standing in the anti-Romney corner. A significant part however is his focus on social issues, particularly his strident anti-abortion message. (In Iowa, according to St. Louis Today, among Iowa caucus-goers who regard abortion as their most significant issue, 55% voted for Santorum.)

While the notion of being anti-abortion is certainly mainstream in the GOP, having abortion as a voter’s single issue, or most important issue during what is going to be the most important election in a century makes no sense at all. There are so many threats to the nation as a whole that to base one’s vote on that single issue is absurd – particularly as abortion rates have dropped by 30% in the last 20 years and a president's impact is minimal regardless. How did unborn babies fare in the Soviet Union? Not particularly well. How did unborn girls fare in China over the last three decades? Not well either. Counter-intuitively, the Socialist Mecca of Europe has lower abortion rates than we do, but one wonders if that might be because they’ve stopped having sex or something because they are not having many babies either…

Voting for the candidate who is most vociferous in his defense of your one issue to the exclusion of everything else is suicide. While candidate Rick Santorum speaks about limited government and lower taxes and overregulation on the campaign trail, Senator Rick Santorum was far from a constitutional conservative. He voted in support of most of George Bush’s big government agenda, he voted against NAFTA, voted for steel tariffs and was a huge supporter of earmarks. And just in case there’s some uncertainty as to Rick Santorum’s view of the role of government, in 2004 he laid out his view very clearly:

One of the criticisms I make is what I refer to as more of a Libertairanish right. They have this idea that people should be left alone, be alone to do whatever they want to do, government should keep our taxes down and keep our regulations low, that we shouldn’t get involved in the bedroom, that we shouldn’t get involved in cultural issues. That is not how traditional conservatives view the world. There is no such society that I am aware of, where we’ve had radical individualism and that it succeeds as a culture.

Obviously Rick Santorum has never heard of the United States. Both his record and his words make it crystal clear that he is no friend of limited, constitutional government. Big government has set us on a course to turn the United States into a socialist / statist Mecca. Unfortunately for everyone involved (and that includes unborn babies) that Mecca is more like a nightmare of economic malaise, sub standard medical care, a lack of individual freedom and long term social decline. Rick Santorum may sound great on babies, but he will do nothing to take us off that path to disaster. Those single issue voters who are supporting him just might want to think again, or consider the prognosis for the country (and its unborn babies) once America becomes an economic basket case and modern day dystopia.
Posted by Imperfect America at 1:33 AM