Ted Cruz and what the GOP establishment can learn from Osama Bin Laden...

In 1975 & 76 the United States was experiencing a crisis of confidence. Unemployment was at 8.5%, our allies in South Vietnam, who 58,000 American servicemen gave their lives to defend, had just been overrun and the reverberations of an OPEC embargo were sending oil prices from $15 a barrel to $100. At the same time Paul Ehrlich was warning about overpopulation and starvation, Newsweek was telling of a coming ice age and many thought we were conceding Eastern Europe to the Soviets.

It was into this emotional and economic morass stepped Ronald Wilson Reagan with a message of hope. He took clear aim at Gerald Ford and fought him all the way to the convention floor. He did so against the wishes of GOP party barons. He did so despite warnings that he would irreparably damage Gerald Ford and give the election to the Democrats. Reagan held firm, and indeed Ford lost to Jimmy Carter, who took an economic malaise and turned it into a full blown economic disaster. Interestingly, after Reagan’s speech at the convention many delegates left wondering if they had made the wrong choice…

If that’s where the story ended, it would indeed be a cautionary tale. But as we all know, the story didn’t end there. In 1980 Ronald Reagan picked up where he left off and eventually beat Carter in a landslide, taking 44 states and the Senate with him, the first GOP Senate majority in a quarter century. 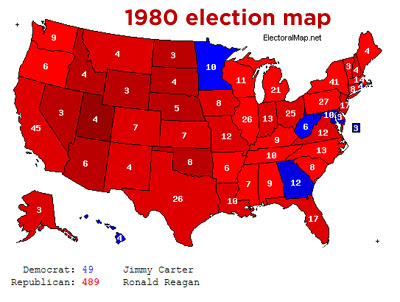 At the end of the day, the 1980 election had something the Ford Carter contest four year before didn’t – a clear cut contest of ideas, with Carter suggesting the solution to the nation’s problems could be found in government action while Reagan felt government was the problem. The American people were faced with the starkest contrast since LBJ beat Barry Goldwater in 1964. Faced with that contrast and with conservative principals clearly articulated by Reagan the contest wasn’t even close.

The point to be drawn from 1976 & 1980 is not that one shouldn’t buck the establishment, but rather that when Americans are presented with a clearly articulated conservative candidate, conservatism wins and the establishment will eventually get on board… if only to avoid being left out in the cold. The Goldwater loss was unique in that it occurred in the shadow of JFK’s assassination.

Today we are faced with a somewhat similar scenario, where a number of “Wacko Bird” conservatives, with Ted Cruz leading the pack, are bucking the GOP establishment. While it’s not in a presidential campaign (yet) the lines are just as stark as they were a quarter century ago and the stakes just as high. Cruz, along with Mike Lee and few friends are suggesting that a government shutdown is preferable – although not necessary – to the American people getting the hook of Obamacare subsidies set in their wallets, because everyone knows that once an entitlement is in place it’s next to impossible to repeal. The barons of the party, from Boehner and McConnell to Rove and Krauthammer, suggest that the backlash from a stoppage will come back to bite the GOP at the polls in 2014. That isn’t a compelling argument in the first place, but it’s particularly feeble given the recent dire warnings – albeit from the president – but little actual blowback for the GOP from the sequester kicking in.

Cruz and co. have also come out strongly against Marco Rubio’s wretched immigration bill. Seemingly the entire GOP establishment is braying that if the House doesn’t pass this monstrosity that the GOP will go the way of the Whigs. The reality is that this bill will not only not accomplish what the establishment Pooh-Bahs claim, but it may well bring about the very outcome they claim fear, eviscerating support for the GOP, only in this case from conservatives fed up with a party that plays pander politics just like the Democrats. Indeed, conservatives constantly harangue liberals for their ignoring the facts in favor of fanciful claims that never come true. In this case the GOP barons need only look back to Ronald Reagan’s faulty 1986 immigration reform to recognize what failure looks like and understand that the Gang of Eight’s abomination is simply a replay that will have even worse results.

The bottom line is that Cruz should not only carry on, but he should draw bright lines in the sand or on the Capitol Hill steps or anywhere else he can get an audience. The Obama agenda in general and these two pieces of legislation in particular are going to be keys to the destruction of the GOP and the nation. At some point creating a national majority of dependant voters will have permanent negative consequences for a party that claims to champion freedom and opportunity. If Ronald Reagan demonstrated anything in 1980 it is that Americans respond to clear lines. In 2008 & 2012 the GOP establishment produced highly flawed candidates whose lack of conservative bona fides caused millions of voters to simply stay home rather than actually go to the polls… and this is despite the fact that the opponent was Barack Obama, and they hate that guy!

The GOP establishment can whine as much as they want about Cruz et. al scaring away middle class voters and minorities by digging in against pandering legislation, but the reality is that since 1992 the establishment has delivered five popular vote defeats and one modest victory. In the Electoral College they’ve delivered more than half the states just twice. Compare that to Ronald Reagan’s three victories (as Bush I’s first campaign was a referendum on Reagan’s policies) where the he delivered popular vote victories of 10%, 18% and 8% and Electoral advantages of 38, 48 and 30 states. 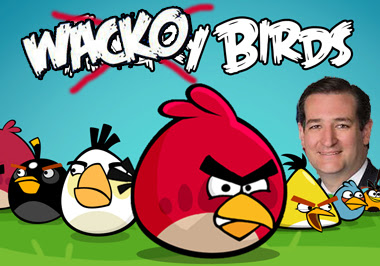 The lesson to be learned is not that the GOP should seek to out pander Democrats, but rather, they should make a strong stand for conservative principals and give the voters a clear choice rather than forcing them to choose between the lesser of two evils. In what is no doubt the only time in my life I’ll ever quote Osama Bin Laden in a positive context, he was unquestionably right when he said: “When people see a strong horse and a weak horse, by nature, they will like the strong horse.” Ted Cruz is just such a strong horse and he should continue to buck the GOP establishment and in the process demonstrate exactly what it means to stand for something. If he does that, my guess is that voters will respond positively to a 2016 run. The question is, are there enough “Wacko Birds” in and out of Congress willing to pick up their shields and emulate him in order to make 2014 look more like 2010 than 2006? For the country and the GOP’s sake, let’s hope so.
Posted by Imperfect America at 1:19 PM