A solution for American economic malaise - Detroit as a proving ground for economic prosperity.

The United States is in the midst of an economic malaise. 92 million Americans are out of work. 35% of the population is on welfare. The economy is barely growing. While incomes for the richest have been skyrocketing, the middle class has seen their incomes decline by 5% in the last 5 years. The federal debt stands at $17 trillion, up $6 trillion since Barack Obama became president. All of this while the Fed has been pumping tens of billions of dollars a month into the economy for years…

Although Barack Obama has made much of this worse, the truth is, things have been going the wrong way for half a century and rather dramatically for a quarter century. Of all of the problems that exist today – and their numbers are legion – there are two that are most troublesome: regulations and taxes. These two things have hammered the fount of American prosperity, the middle class.

First is the regulatory state – particularly federal regulations. Being an entrepreneur, running a successful small business (from whence 2/3 of all new jobs emerge) takes a great deal of work, tenacity and effort. Unfortunately however, the cost of complying with regulations has skyrocketed over the last 40 years. From the EPA to OSHA to the NLRB to HHS and a seemingly endless array of acronymmed bureaucracies come regulations that strangle job creation, and in the process, prosperity. According to the US Chamber of Commerce – no friend to small business – the cost of complying with government regulations at all levels has almost quadrupled since 2000… and all of those increasing costs contribute to the growing death rate among small businesses, which in turn take jobs with them. 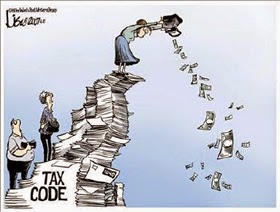 Then there are taxes, again, particularly federal taxes and the insane complexity of the IRS tax code. This can be summed up in one measure: According to the Tax Foundation’s 2014 International Tax Competitiveness Index the United States ranks 32 out of 34 developed countries in terms of the competitiveness of our tax system – and if it weren’t for our relatively low consumption taxes, ranked 5 out of 34, we’d be dead last. That means, for companies seeking to invest their money, of the 34 OECD nations, only 2 of them have tax structures that are less inviting than the United States, Portugal and France. Imagine that, that the United States tax system is less attractive to investors – and prospective employers – than Turkey, Estonia, Chile… and even the dysfunctional Greece! While the United States does have advantages… for investors, tax consequences are an extraordinary driver of their choices. And unfortunately for American workers, the government is making the choice to invest in the United States less and less appealing every year.

Despite what you might hear on the Sunday morning news programs or read in the NY Times, this new American malaise is not an intractable problem, is not an unsolvable problem, in fact, the solution is rather simple. Fix those two problems. “How?” you say.

First, sunset every federal regulation on the books. If necessary, pass a Constitutional Amendment that states that every federal law has an implicit sunset provision of 10 years unless it passes each house of Congress by at least 60%. It would also stipulate that all federal regulations sunset after 10 years, regardless of the margin of passage of the underlying law. If such regulations demonstrate themselves to be effective and necessary, they can be renewed. If a regulation were deemed or proven to be sufficiently important to be granted permanent status it should then be passed as a law rather than remaining a regulation.

Second, implement the Fair Tax – although a 10% flat tax might be a distant second suggestion. In 2014 investors have the world at their fingertips. Choices abound from Estonia to Singapore to Switzerland to Canada. If the United States were to implement the Fair Tax, not only would the economy be jolted by an immediate influx of an estimated $2 trillion from the offshore holdings of American companies, it would likely experience an additional annual influx of hundreds of billions of dollars of direct investment from foreign companies seeking to set up shop in the United States. Those additional trillions of dollars would result in the creation of millions of jobs – and these would be real jobs in the real economy, unlike the boondoggles inflicted on the country by President Obama’s “Stimulus”. In addition, the resulting savings of the hundreds of billions of dollars wasted each year simply trying to comply with the incomprehensible IRS tax code could be spent on useful things – or just fun – and the hundreds of millions of hours saved could be spent on work or leisure.

Of course it’s one thing to point these things out and another to actually get them done. So, as in an effort to demonstrate the potential effectiveness of the above I’d like to suggest using Wayne County, Michigan – where the disaster area known as Detroit is located – as an “Enterprise Zone” proving ground. This demonstration would turn Wayne County into a federal tax and regulation free zone. Eliminate all federal regulations within the county and eliminate all federal taxes save a 23% embedded tax.

This wouldn’t impact public safety or individual rights as public safety and law enforcement are state and local functions while citizens’ rights don’t come from regulations but from the Constitution… which would still be in force. 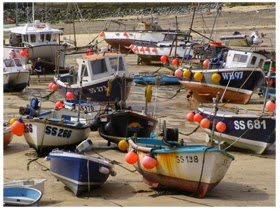 Creating a county wide Enterprise Zone centered on the country’s most economically dysfunctional city would be a perfect opportunity to demonstrate the potential prosperity free market competition can create. Massive amounts of investment would take place and a cacophony of companies would be started, sometimes built on nothing more than an entrepreneur’s idea and a willingness to take a risk. And at the same time, jobs would be created… lots of jobs would be created, with employers competing for the best workers.

While there would be some logistical challenges to implementation due to the fact that the proving ground would be surrounded by non participating counties and cities, at the end of the day the results would demonstrate clearly the potential benefits of dialing back the twin garrotes of federal action that have been strangling American prosperity for half a century. With actual data in hand then the debate over applying the same to rest of the country could begin. Maybe then the country could get back on the road to prosperity where a rising tide lifts all boats rather than today’s perpetually receding tide that leaves most American boats slowly sinking in the mud of the exposed sea floor.
Posted by Imperfect America at 4:05 AM