Liberals often live in a fantasy world that ignores the real world right in front of them. They continue to pour trillions of dollars into poverty programs despite the fact that poverty persists and grows. Their go to solution for failing and failed government schools is always spend more money rather than embrace solutions that actually work such as charter schools or voucher programs. It’s no surprise then that their tired solutions rarely ever solve the problems they are ostensibly focused on.

Strangely, that dynamic exists even when the problem itself is fiction. The perfect example of this is the state of California. In an effort to address congestion on California roads (which is a real problem) and to fight man-made global warming (which is a fiction) California is planning on spending anywhere from an estimated $68 to $98 billion taxpayer dollars to build a high speed rail link from Los Angeles and San Francisco. This, despite the fact that most traffic in California is from people traveling within metro areas, not between them. Think about it, LA’s worst traffic is usually 10-15 miles on the 405 or I-10 during rush hour, not on I-5 north of the city. A high speed rail ticket between LA and San Francisco that was originally projected to cost $50 is now expected to cost more than $81. That’s a round trip cost of either $100 or $162. Today you can get a round trip plane ticket between the same two cities for $135. What’s more, the line will likely require additional hundreds of millions of taxpayer subsidies annually just to maintain operations... and it will increase carbon emissions! 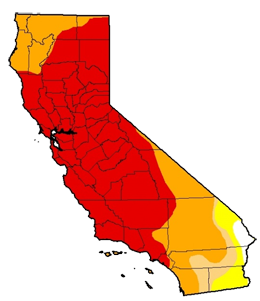 So there we have it, California plans to spend what will likely be in excess of $100 billion to build a rail system to solve a problem that doesn’t exist and another that can’t be solved by such a system. This, while the state is facing a real problem that it actually can solve: a shortage of water. The state has been gripped in a drought for years, but even in non-drought years water is a problem in California. In addition to families with no water, in the San Joaquin Valley, dubbed “America’s salad bowl” vegetable farms are left idle as there is no water for irrigation. (The drought is not the only cause there…) The $100 billion that the state is wasting building the rail boondoggle could be spent instead on desalinization plants up and down the Pacific coast. Recently the nation’s largest desalinization plant opened in San Diego… but it almost didn’t as years were wasted fighting litigation by environmental groups. That $1 billion facility will produce enough drinking water for approximately 250,000 people annually. Using that metric, for the amount of money California is wasting on the rail system it could desalinate enough water for 26 million people, more than 65% of its population.

The reality is however that the state doesn’t need to build desalinization plants to support 65% of its population. It’s likely that building the capacity necessary to provide water to 20% would be more than sufficient to address most water issues, and that could be done for approximately $30 billion. But that’s not on the books. Given that California is the epicenter of liberalism in the US, that’s not a surprise.

If there is a second center of liberalism in the US, it’s undoubtedly New York, and not surprisingly, it suffers from the same problem as California. Only in New York the tool of choice for seeking to slay the faux dragon of man-made global warming is not absurdly expensive transportation subsidies, but rather absurdly expensive green energy subsidies. New York has recently agreed to spend close to $1 billion subsidizing multi billionaire Elon Musk’s money losing solar panel installation company, SolarCity. This, while the governor of a state with a 6.6% unemployment rate continues to ban the fracking for natural gas, a cleaning burning fuel that has pumped billions of dollars in to the economies of states from North Dakota to Pennsylvania while creating tens of thousands of good paying jobs. So once again, a liberal state is spending boatloads of taxpayer dollars to solve a problem that doesn’t even exist while at the same time it refuses to look at a viable solution to real problems – in this case unemployment and energy prices.

And so it goes with liberalism, using rational solutions to attack real problems takes a back seat to solving fake problems that dovetail with the left’s worldview, regardless of the consequences. California is in the midst of a water shortage that is having devastating consequences on millions of its citizens on a daily basis. New York is seeing jobs and citizens flee the state for lower taxes and better job prospects. In both states the governors have decided those very real problems are not as important as pandering to their political base by tilting at the windmill of global warming. The result is actually worse than if the state did nothing at all. If they were doing nothing the taxpayers would at least be no worse off than they are now. Unfortunately however, the taxpayers in the 4th and 1st highest tax states (respectively) are on the hook millions or billions of dollars and will be much worse off in the long run. Such is liberalism: obscure failure in the real world by selling grand designs of some future success that never quite works out as promised… then simply count on voters to forget about that failure as you dazzle them with your next quixotic mirage.
Posted by Imperfect America at 5:12 PM