When the Ebola scare is done the damage it will have done is likely to be far more reaching than just the individual victims themselves. Of all of the things the government is supposed to do, protecting its citizens is likely very close to the top in most people’s minds.

Indeed, government is supposed to do for citizens that which they cannot or choose not to do for themselves – limited of course to those things it has been constitutionally empowered to do. National defense being the prime example. Others include the court system, international treaties, tax policies, etc. Americans have not traditionally – at least for the country’s first 150 years – looked to government to become the provider of all things or the solver of all problems.

Today, for a large part of the population that is no longer true. Whenever something bad happens, they look for government to fix it. A sluggish economy, high unemployment, a failed automobile manufacturer, you’ve lost your job, you can’t get insurance, you can’t support your kids or you want to build a new stadium, look to government for a solution. Or, competitors are eating away at your natural monopoly, your kid can’t read, you think the CEO makes too much money, you haven’t paid your water bill in months and the water company has turned off your service… look to the government for a solution. Usually these solutions come about in the form or a check or government using its police power to force other people to do your bidding.

The result of government spread so wide, doing so many things, having its tentacles in virtually every aspect of American life is that not only does it do a bad job at practically everything, it often fails spectacularly at those limited things it’s supposed to be doing in the first place. 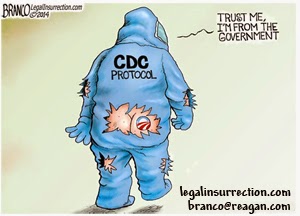 The Ebola situation is the perfect example, writ large. Ebola is a disease in that until recently was largely confined to Africa. While Ebola is not the continent’s largest killer, what makes it somewhat unique in that it kills 70% or more of the people who catch it, usually within a few weeks. And, we don’t really know how it’s transmitted, but we know that coming into contact with a carrier – even after they are dead – or their body fluids can transmit it. Can it be transmitted by mosquitoes? We’re told no, but viruses mutate. Can it be become airborne – thorough say, sneezing? The goalposts seem to be moving. Can it be transmitted by touching objects a carrier has touched? Don’t know for sure.

Ebola has, by everyone’s measure, the potential to become a true epidemic. As such, Ebola might be one of those things that most Americans agree is rightly a government interest, something the government should be focusing on and doing what it can to inform and protect citizens.

Unfortunately, thus far the government’s action has been an abysmal failure, beginning with Barack Obama’s inexplicable decision against imposing a travel ban from the nations where Ebola is raging, and his September 16th assurance that the chances of Ebola reaching American shores were “extremely low”. Four days later US patient zero, Thomas Eric Duncan, landed in Dallas from Liberia.

A week later Duncan was in a Dallas Hospital with Ebola. Since then, two nurses who treated Duncan have come down with the disease. When the first nurse, Nina Pham, came down with Ebola, CDC director Tom Frieden suggested it was her failure to follow protocol that caused her contraction. Later it turned out that Ms. Pham had followed all protocols from the CDC, the same agency that in August said: U.S. hospitals can safely manage patients with Ebola disease.

A month in, confusion reigns. The CDC goes from reassuring the public that Ebola requires contact with a victim and is not a respiratory ailment spread like the flu, to later warning that just standing within three feet of an infected person poses a risk. At the same time news emerges that Amber Vinson, the second nurse to treat Duncan, was told she was OK to fly by the CDC after calling to report her possible symptoms. Later CDC Director Tom Frieden stated that she should not have flown.

While all of this chaos is going on, politics rears its head when the administration and Democrats suggest the GOP is to blame for having called for budget cuts. Then it emerges that not only did the GOP give both the CDC and NIH more money than requested by the president, but that the agencies had wasted tens or hundreds of millions of dollars studying things like the propensity of lesbians to be fat, the impact of TVs and gas generators on a village in Vietnam, and what bus riders thought of HIV videos. Indeed, over the course of 5 years the CDC spent more than $2.6 billion on HIV and AIDS grants that the agency itself admitted: “have no objectives” or were otherwise useless.

What the Ebola crisis is putting on full display for the American people is the malfeasance and ineptness of a government that takes $3 trillion of their money each year yet can’t seem to get the basic things right. One doesn’t need a PhD in biology to understand that making it more difficult to travel to the US from a country infected with this virus is a good thing. One doesn’t need to be a rocket scientist that recognize that millions allocated for health research shouldn’t be wasted replacing perfectly good furniture or buildings. It doesn’t take a 140 IQ to understand that a person recently exposed to a deadly virus shouldn’t be given the OK to fly on a commercial jet. But in modern day America, that’s how government operates – or as in the case of a travel ban… doesn’t.

If the government is making horrendously bad decisions, providing conflicting and inaccurate information and wasting billions of taxpayer dollars in an area that literally involves life and death, and one that is playing out on the front pages of every newspaper in the country, just imagine how badly their mismanaging everything else they are doing from the mundane to the obscure, most of which is played out behind closed doors with the help of cronies and lobbyists and political financiers. Maybe the silver lining of the Ebola cloud will be the long overdue recognition by a majority of Americans that not only is government not the solution for everything that might go wrong, but maybe it’s meddling failures are behind many of things that go wrong in the first place.
Posted by Imperfect America at 6:22 AM