Uncle Sam: Paying for #$%@& you would never consider... at the point of a gun

I’ve always been an advocate of English Only as the law of the land. It’s not jingoism that drives that but rather the need for communication. People have a difficult time communicating in the best of circumstances. How many times have you heard a husband or wife who have been married for a decade say about their spouse “He (or she) simply doesn’t understand me?” Or have you ever been involved in a political or religious discussion when at some point you think the person across the table is simply speaking a different language, despite the fact that both of you are using the King’s English. A common language is a starting point for communicating with one another, not the end in itself.

In a similar way, political discussion often looks like people trying to talk to one another using completely different languages. Take the Bush tax cuts for example. If nothing is done in the next month taxes will rise for everyone in America – or at least for those who pay income taxes. Democrats accuse the Republicans of wanting to give tax cuts to the rich. The GOP says they don’t want to raise taxes on anyone, rich or middle class. Same situation, two different takes.

This might sound like a simple question of semantics, but actually it’s anything but. The left frequently uses language to try and hide what is really being said – not a surprise coming from a party that is heavily supported by trial lawyers. They crucified George Bush as trying to gamble senior citizen’s retirement money on Wall Street when he sought to reform Social Security. Nothing could have been farther from the truth, but it played well enough in Peoria that the proposal never made it out of the gate. Such is the language of government: Lots of words, little communication and even less truth.

Every time some Democrat talks about the government doing this or that good thing they are not referring to some Xanadu where the government only does wonderful things for the citizenry, where there is plenty of everything to go around and where things work like a well oiled machine. Rather, they are using illusory language to talk about something quite different. They are at the most basic level talking about the government making choices for you… at the point of a gun. Make no mistake, that is exactly what government does. If you decide not to pay income taxes this year, the government will send you some correspondence seeking to get you to pay up. If you ignore them you will likely have your wages garnished or your bank account emptied. If that does not work or if you try flee, the IRS will send federal marshals after you and you can be sure they will be carrying guns. It happens every day. You don’t see the guns, but they are implied.

Those three projects cost a total of $2,151,372. In the current environment that might sound like much. Looked at another way however, it takes on a bit more consequence. The average individual or family who filed a tax form in 2008 (the most recent year for which data are available) paid, on average, $7,366 in 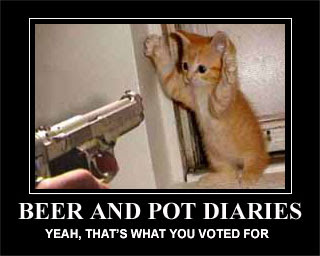 federal taxes – and that doesn’t include Social Security and Medicare/Medicaid taxes. That means that $2,151,372 represented the entire federal tax bill for 292 families across the country. That $7,366 the government took from each of those families and used to pay for the Buffalonians to write down how much beer and pot they used couldn’t be used to pay for school supplies for their children. Couldn’t be spent on replacing their old car. Couldn’t be spent to take the family to Disney World. Couldn’t be spent catching up on their mortgage. Couldn’t be given to their local church or charity. If that’s too obscure or disconnected for you, take a look at your own checkstub or income tax return. Whatever you paid, $7,366 (or everything up to it) went to support one of those programs above. What could you have done with that money?

Unfortunately for America, this $2 million is only a tiny slice of the money the government forcibly takes away from Americans to spend on things they would never spend their own money on. And it’s not just the Stimulus. It’s virtually the entire government. Farm subsidies. Welfare payments to recipients with enough money to buy cell phones, video games and big screen TVs. Thousands of dollars in bribes to buy electric cars few people want. Hundreds of millions of dollars to fund public broadcasting in the most diverse media market in the world. $123,000 salaries (and benefits) for federal workers who operate the dysfunctional government in the first place!

And what’s worse, it’s not just the money. The government increasingly is taking aim at the choices you should be making for yourself: How you can pay for college. Whether or not you must be a member of a union – and of course pay union dues, which are then spent on Democratic politicians whether you like it or not. What doctors you can choose. The kinds of cars you are allowed to buy.

Democrats (and too many Republicans) try to dress up this travesty in governance in innocuous or paternal sounding language: Insurance for children or A right to own their own home or Fairness in education. Behind every compassionate sounding phrase is the reality of dysfunctional government programs and regulations that take money out of the pockets of workers and take liberty and choices away from everyone.

At the end of the day government exists to provide citizens with an environment where they can enjoy their liberties and pursue happiness. Not sure? Let’s go to the source:

We hold these truths to be self-evident, that all men are created equal, that they are endowed by their Creator with certain unalienable rights, that among these are life, liberty and the pursuit of happiness. That to secure these rights, governments are instituted among men, deriving their just powers from the consent of the governed.

The Declaration of Independence is why we have a government. The Constitution is how we do it. The Constitution describes a variety of government responsibilities such as providing for a national defense, limits on abridging individual rights and liberties as well as a role in areas such as interstate commerce, patents, roads and few others. It was limited by design. Somewhere in the last century that limited design was shunted to the side and is rapidly becoming a distant memory.

As 2010 comes to an end and the newly recalibrated Congress begins its work, the country is likely at something of a tipping point. Will it be omnipresent government that decides how we can live our lives and takes our money to spend on beer and pot diaries or will it be individual freedom where citizens are free to pursue happiness and benefit their families and communities prosperity resulting from ingenuity and hard work?

Such basic questions sometimes get lost in the language of politics but we allow that to happen at our own peril. Indeed Barack Obama and the Democrats won in 2008 with the vacuous language of “Hope and Change”... but lost because of "poor communication". As 2012 comes into focus conservatives must move the conversation away from simple platitudes and towards the consequential implications of government policies. If they speak plainly in a language that voters can understand and paint a crystal clear picture of exactly what the choices are, they will surely take the day. The question is, are they equipped to speak that language? Maybe some of them should register for English 101 in the spring just to make sure.
Posted by Imperfect America at 2:16 AM