What is America? A country, an idea or both?

I heard someone remark this week that Barack Obama did not share the values of the United States because he didn’t grow up here. While initially that sounded plausible, the more I thought about it, the more I disagreed with it. The truth of the matter is that growing up in the United States is no guarantee of sharing values with America. A few examples might be Jeremiah Wright, Bill Ayers, Michael Moore, the late Howard Zinn and many others.

The thing that President Obama and so many on the left do not understand is that the United States is indeed a unique animal. Not only is it a country, but it’s also an idea. People around the world don’t just dream of coming to America, they dream of becoming Americans. Many have and continue to risk their lives to do so. It’s one thing to risk your life escaping the Soviet Union, Communist China or even Communist Cuba. Those people were or are running from something, trying to go anywhere else. It’s another thing altogether to risk one’s life to come to a place… And that place is more often than not, America.

America is somewhat unique in the history of mankind – or at least in the last 2,000 years. People may dream of moving to Paris for the romance and the food, but they don’t dream of becoming a Frenchman. Many Hong Kong Chinese moved to Canada before the Communists took over, but they weren’t expecting to become Canadian. Someone might move to Singapore for its economic opportunities, but they don’t expect to become Singaporean. Throughout history one has examples of people choosing to move 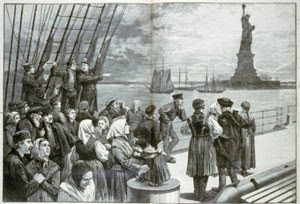 to a different locale to take advantage of economic opportunities or various freedoms. The British Empire offered certain advantages but few Indians or South Africans or Egyptians expected to move to Britain and become British. While they may have been British subjects, they were not actually British. One almost has to go back to the Roman Empire to find something similar to the idea of America. There, outsiders not only dreamed of living in Rome, they also dreamed of becoming Roman… and could do so. The idea of becoming a Roman citizen actually meant something beyond just living in the Empire or being subject to its laws.

Barack Obama misunderstands what it means to be an American. When he says that America is just one amongst equals on the world stage, he misses the point. Most Americans feel like America is indeed a better country than the rest of the world. That doesn’t mean that Americans believe they are genetically superior to anyone else or that we are by definition smarter than anyone else. It doesn’t even mean that the United States is infallible – a point President Obama is more than happy to point out. Rather, it is a recognition of the unique combination of freedom and opportunity that makes the country great. The United States may be filled with mortal men, but the expectation for 200 plus years is that those mortal men can

achieve the impossible… that anything is possible. That sense of can do spirit, of American Exceptionalism has a long history going back to the pilgrims who carved out a place to call home and the rag tagged army that defeated the most powerful empire in the world. There is so much more with explorers, inventors and innovators. From McCormick feeding the world to Edison lighting it to Rockefeller revolutionizing energy and medicine. There’s also flight, winning two world wars, putting a man on the moon and the micro processor. There are even more mundane things like vulcanized rubber, the elevator, air conditioning and the Slinky.

Where Barack Obama and much of the left make their mistake is that they think the United States is synonymous with Uncle Sam… the federal government. They think America began to be great when the progressive agenda began to fall into place. They think of America as a place where the government makes people equal, where the government provides or guarantees everyone healthcare, welfare, education and income. America is great because the government protects the little guy against the modern robber barons. In essence, America is great because Uncle Sam is there to look out for everyone. In their zero sum game universe the government is there to adjust the down markers and move the goal posts so that everyone gets their “fair share”.

Barack Obama and the left are simply wrong. There’s an old saying about someone being born on third and imagining they hit a triple. They have the luxury of imagining the government is what makes America great precisely because for so long the government largely heeded the Constitution’s bounds and America prospered. It is only because the private sector was so successful, it is only because so many entrepreneurs risked everything, it is only because so many millions of Americans worked hard and created so much national wealth and prosperity could the progressives find an opportunity to think up things for the government to do. From Teddy Roosevelt attacking the robber barons to FDR paying farmers to kill pigs and let fields go fallow to Barack Obama pouring a trillion dollars in stimulus money down a rat hole, it is only the success and wealth created by the American people that made such folly possible.

One does not need to have grown up in America in order to appreciate what America is. (Read Paul Johnson’s History of the American People and you’ll see it on perfect display.) Anyone can look at a map and find the United States nestled between two oceans. It’s another thing altogether to know what the country is about, what its people are about, what the source of its greatness is and what makes it unique. Barack Obama and the Democrats can probably find the country on a map. Unfortunately it’s the other things, the more important things that they can’t see. That’s too bad for them, and as long as they making the rules, too bad for all of us.
Posted by Imperfect America at 8:51 AM